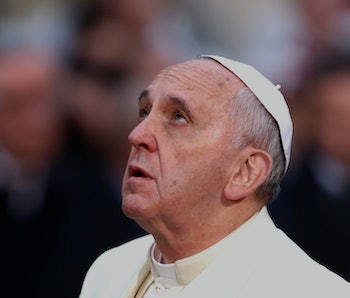 There have been so many mind-blowing, holy-shit-am-I-hallucinating moments in the rise of Donald Trump’s candidacy, it’s a fool’s errand to tally ‘em up or even guess what could happen next. But, for the purposes of this particular Twitter battle, let us remember that — less than a week ago — Donald J. Trump and Pope Francis, of the Roman Catholic Church, were goin’ at it. Holy shit, indeed.

The Pope questioned whether or not Trump was a Christian because of his whole building a wall between the U.S. and Mexico thing. It’s not immediately clear who came up with it first, but someone pointed out to Trump that the Pope lives behind a wall of his own, in Vatican City. For our purposes, let’s say it was Trump’s director of social media, Dan Scavino.

Okay, yup, pretty sick burn: witty and full of ‘tude. The Pope’s walls were such a high-five-worthy moment for the Trump camp that the orange-haired maniac, himself, tweeted the serve and even mentioned it in this week’s town hall. But, let’s pick it apart a bit (even if they kinda-sorta made up already). You know, hook the Trump crew up some of those “facts” they don’t really like to deal with and burn them right back in the process:

This has been your Twitter Burn of the Week.

More like this
Innovation
1 hour ago
Look: This tiny robot could change medicine forever
By Katie MacBride
Innovation
Sep. 26, 2022
This sound-powered underwater camera could reveal deep-ocean secrets
By Molly Glick
Innovation
Sep. 25, 2022
ePlane? Electric planes may come sooner than you think
By Gökçin Çınar and The Conversation
Share: