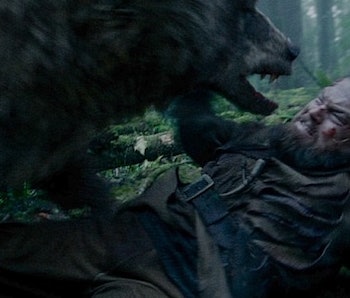 Even if you haven’t seen The Revenant yet, there’s a good chance you’ve heard about the already infamous bear attack. The scene is no less intense for having been done with stunt men and CGI and a lack of live bears — it looks harrowingly real, and given the Revenant’s chances to win a heap of Oscars, it could wind up being one of the most infamous animal attacks in movie history.

This got us thinking: How does one survive a bout with a bear? The frontiersman trapper who was mauled by a grizzly in 1823 survived by — well, it’s not really clear how the hell he survived. Hugh Glass was a dead man who passed into legend by defying the known laws of human perishability. Time wrote a review of a 1939 book that recounted the tale:

“In 1823, Glass joined a team led by Andrew Henry that traveled up the Missouri River and the Grand River in modern-day South Dakota. It was during that trip that Glass was mauled by a grizzly bear. ‘Before Glass could shoot or retreat, the animal had seized him and bitten out a large chunk of his flesh, which she dropped to her younglings,’ the book relates. ‘Glass screamed for his fellows but before they could kill the bear he had been mangled from head to foot.’”

Let us not, then, consider the case of Mr. Glass a template for future attacks. Instead, I rang up wildlife expert Peter Gros, who you may have seen on Animal Planet or appearances on Jay Leno’s Tonight Show, who explained why you’re better off avoiding a 900-pound wild animal altogether.

Well, I haven’t seen the movie. I saw the trailer! Looked to me like it had been done digitally. I don’t know how it would be done. In terms of how to behave in bear country, it is uncommon for bears to attack people. It’s like everything to do with a wild animal: It is sensational press. If there’s 20,000 serious lawnmower injuries, you never hear about it, but if someone gets bit by a big dog it’s sensationalized, all of a sudden all dogs are potentially dangerous.

Right. But if I were in a situation where a bear was coming at me, what do I do?

Just don’t even let yourself be in that situation. We’re talking about massive animals. In the case of grizzlies, they are protective around their offspring. So I always tell people to walk in groups with at least around six people. And make lots of noise. Of the attacks I have heard about, in some cases it’s when grizzly beers are startled and they have their young they’re protecting. Also grizzlies don’t climb trees as well as black bears, so they’re on the ground with you.

Grizzlies will stand their ground. The important thing is grizzlies normally avoid contact with people, so that’s good to know. They almost never view humans as prey and rarely actively hunt a human. If they have plenty of food around, that’s what they’re most invested in. The thing is food. They have the most sensitive noses in the world and a big stomach that needs to be filled before hibernation. At the end of the cycle they’ve bulked up, they’ve added 300 to 400 pounds. Then at the end of hibernation they come out with their young, ready to start bulking up again so that’s when they’re most hungry. There have been attempts, especially near natural forests, to get bears associating people with negative things like rubber bullets, noise makers, foul tasting chemicals. We want them to have a negative association around humans to minimize contact.

What do I need to pay attention to if I want to ensure I’m not crossing paths with grizzlies?

The biggest problem is food. Once they eat a camper’s food the association is hard to reverse. If you leave food out for a bear, you may have given it a death sentence. In some places, if a bear has continual action among people, they may even have to put them down because they’re too dangerous. You can hang your food in a tree or now there’s bear-resistant barrels you can use. Just give them lots of space. And be able to identify a grizzly because those are the ones most likely to be aggressive. They’re up to 900 pounds and they have a huge lump on their back, so they’re hard to miss.

What if everything fails and I’m face-to-paw?

I don’t know the answer to that. What you need to be aware of is what you’re doing in bear country. I even suggest to people to have little bear bells on your backpack, so as you’re walking through the forest you’re going to give off a noise and bears will be aware of you. Do your homework before you go. Talk to the park rangers. Go online and see where you’re going to be hiking. Talk to rangers about what contact there has been. See what certain times they might be out grazing. If you’re in Alaska, they’ll be down feeding on salmon, so avoid those spots. Most importantly, enjoy the fact that we should have fear of them, but certainly a great deal of respect. Learn to enjoy that we share the natural world with them without getting close.