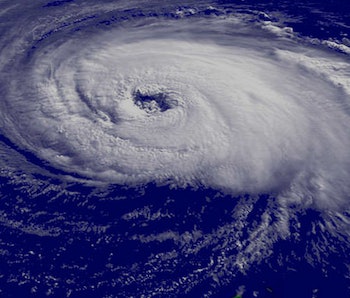 Full disclosure: These words are being typed from South Florida by a veteran of many violent storms, including Andrew and Katrina.

Just yesterday, the category 5 tropical cyclone Winston made landfall in Fiji and left much of the world wondering what exactly a cyclone is. The word “cyclone” sounds scarier than “hurricane,” but don’t let the fear factor of the name fool you.

Cyclones, typhoons, and hurricanes are all the same phenomenon. They are rotating storms with strong winds and thunderstorms swirling around a low-pressure center, known as the “eye.” The eye is the creepiest part of the storm — it’s when you think it’s all over, and you go outside to assess the damage and then a tornado sweeps you off to Oz.

Winston is called a tropical cyclone because it originated over tropical seas. These form over large bodies of warm water which evaporates to create rain clouds. According to Wikipedia: “The strong rotating winds of a tropical cyclone are a result of the conservation of angular momentum imparted by the Earth’s rotation as air flows inwards toward the axis of rotation. As a result, they rarely form within 5° of the equator. Tropical cyclones are typically between 100 and 2,000 km (62 and 1,243 mi) in diameter.” You’re welcome for that bit of info.

Cyclones rile up high waves, tornadoes, storm surges, cause flooding, and pretty much have the power to destroy everything in their paths. But the good news is they also bring heat energy to temperate climates, which helps keep our Earth’s climate in check.

Winston luckily didn’t hit very populated centers, so the death toll is fairly low at ten. However, thousands of homes and a lot of property were destroyed — a hospital even lost its roof — trees are down and the power is out in many parts of Fiji. Though CNN reports experts are saying this is “the most powerful tropical cyclone that the Southern Hemisphere has ever seen,” flights to this paradisiacal archipelago will be back to normal on Monday. So, though the islanders will be living in a decimated hell-scape, there’s no need for jet-setters to change their travel plans.