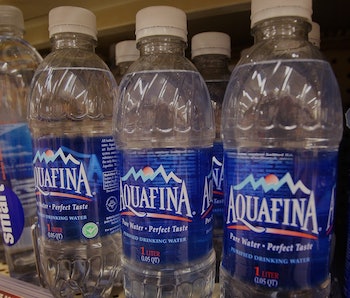 File to: “Obviously. What kind of idiot do you take me for?” The world’s biggest bottled water brand is going to start admitting that it comes from the exact same source as the tap water disdained by snobs.

USA Today reports Aquafina has changed its labels to specify P.W.S. — Public Water Source — under pressure from Accountability International. PepsiCo spokeswoman Michelle Naughtron called this a “reasonable thing to do” if it helped people understand that they were paying a premium to have the same water they get in their bathroom sink labeled with a serene mountain scene.

And it’s quite a premium. ConvergEx Group Chief Market Strategist Nick Colas explained consumers were flushing thousands on their favorite label of H2O in an interview with Business Insider:

Two thousand times what we spend on tap water! You have to hand it to their marketing department, and not just Aquafina. Fiji even managed to get a brand of bottled water under military dictatorship and shipped across the world showing up with Al Gore.

Throwing away money is one thing; throwing away all that plastic is entirely another. It’s almost a joke that we have a plastic mass double the size of Texas floating around the Pacific, or that almost every single seabird on the planet will have plastic in its digestive system by 2050. If those concepts are too abstract and you’d like a visual representation of the toll it’s taking on the environment, here’s an artist’s installation of a whale paddling across an ocean of 70,000 disposable plastic bottles.

More like this
Science
5.26.2022 10:00 AM
NASA Voyager glitch and more: Understand the world through 7 images
By Robin Bea
Innovation
5.23.2022 9:00 PM
How a genetically-engineered tomato could help solve a global health crisis
By Claire Cameron
Science
5.23.2022 10:00 AM
Melting permafrost could expose millions to invisible cancer-causing gas
By Chris Baraniuk and Knowable Magazine
Related Tags
Share: