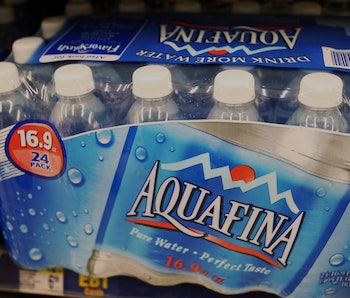 There’s no argument that Aquafina’s water comes from the exact same source as your kitchen sink. That’s what the label P.W.S. on the bottle means: Public. Water. Source. Public being the key word. It’s what the company does with its water that might make it different.

“As stated on the label, Aquafina is purified water,” the spokesperson, who asked not to be named, writes. “It originates from public water sources and is then purified through a rigorous, seven-step purification process called Hydro-7™. That is not the “same water you get in your bathroom sink,” as you noted in your story.

“Hydro-7 is a state-of the-art process that includes reverse osmosis and other filtering methods. It removes things like chlorides, salts and other substances that can affect a water’s taste. That’s how we can ensure that you’ll get a clean, pure taste every time you open a bottle of Aquafina.”

Fair enough, PepsiCo. Aquafina lists each step of the trademarked Hydro-7 process, and it does look significantly more involved than your average filter. And consumers should remember that using public sources for water is not unique to Aquafina. Dasani has also had to label its bottles P.W.S., though that company has its own filtration protocols.

Whether or not those procedures actually make the product cleaner than tap water is a matter of debate. Remember, your local municipality has its own system of cleaning the water that you have right there in your own home. A 2013 study commissioned by World Wildlife Fund International questioned whether the final products of professionally bottled versions were healthier noting that there “are more standards regulating tap water in Europe and the United States than those applied to the bottled water industry.”

Unfortunately, it doesn’t appear as if any major scientific testing has been done since at least 1998, according to Reader’s Digest, with that study from the Natural Resources Defense Council finding that the majority of bottled water was safe, though a few samples had traces of bacterial or chemicals exceeding state and industry standards. But, again, that was 15 years ago.

There is one other absolute, definitive, provable difference between bottled water and tap water. When you turn on your tap, you’re not contributing to a waste load of 35 million plastic bottles every year. That’s something.