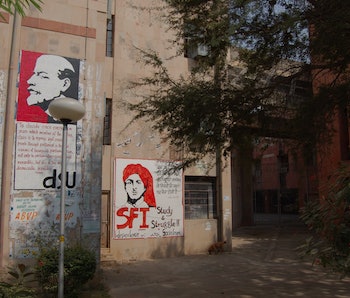 India’s largest nationwide student protests in a quarter of a century are heating up, in reaction to the arrest of student union president Kanhaiya Kumar at Jawaharlal Nehru University. Academics around the world are now voicing their solidarity with the demonstrating students and professors, who are defending their right to free speech and expression.

The student protests number in the thousands, and paralyzed many of India’s universities — especially JNU. Kumar was arrested last week and charged with sedition. Federal authorities branded him “anti-Indian.”

The narrative of the preceding events is murky, but appears to have gone like this: At a student meeting, Kumar spoke critically of India’s controlling party, the Bharatiya Janata Party (BJP). A transcript of his speech doesn’t read as anti-India, but his sentiments are unquestionably anti-BJP. The next day, a group of people held a demonstration for the rights of the ethnic group Kashmiris to have independence from Indian military oppression. (It’s unclear whether Kumar had a hand in organizing it, or whether the protestors were even students.) All this occurred on the anniversary of the execution of Afzal Guru, a Kashmiri man convicted without trial for attacking India’s parliament.

The student group on campus associated with BJP filed a police complaint, and Kumar was arrested. He is now awaiting trial without bail at the Delhi High Court.

“They [the BJP] saw a bunch of students protesting and they saw the only way to curb this protest was through arresting whom they called the leader,” Anusha Hariharan tells Inverse. “But they don’t understand that student power is collective power.”

Hariharan is an alumn of JNU and is currently a graduate student at the University of North Carolina at Chapel Hill. She says that since the BJP came into power it feels like there has been a crackdown in free speech in almost every university in India. Hariharan feels the BJP defines anti-nationalist expressions as any sentiment that going against the party in control — whether it be electing a new party to power, or challenging the idea that the country is not just a place meant for Hindus.

“It’s not anti-nationalist as in someone is saying something to break up national integrity,” says Hariharan. “Anyone who is questioning the regime is seen as anti-nationalist. Even asking for freedom of speech is becoming anti-government.”

Two separate letters right now are circulating the internet, demanding the release of Kumar and the protection of free speech on campus. One has 455 listed signatures, and countless more comments. Julia Longo, also a graduate student at the University of North Carolina, added her name to the list yesterday.

“I signed the solidarity statement with the JNU community because I strongly believe universities should be space for critical engagement, not only in knowledge production but politics as well,” Longo tells Inverse by email. “I believe freedom of speech, protest, and dissent are fundamental tenets of a functioning democracy — sedition laws are the unconstitutional remnants of colonial power, meant to oppress citizens’ rights.”

The other signature list is signed by 133 academics including prominent names like Noam Chomsky, gender theorist Judith Butler, and Nobel laureate Orhan Pamuk. It reads in part:

“Since there is no evidence to establish these charges, we can only conclude that this arrest is further evidence of the present government’s deeply authoritarian nature, intolerant of any dissent, setting aside India’s longstanding commitment to toleration and plurality of opinion, replicating the dark times of an oppressive colonial period and briefly of the Emergency in the mid-1970s.”

While thousands protest the right to free speech and for the right to keep university campuses a place of contested opinions, a fraction of BJP supporters have also taken to voicing support for Kumar’s arrest.

On Thursday, India’s government required that all major universities prominently display the nation’s flag on campus. All federally funded universities are required to do so, including JNU.

“This is psychological warfare,” N. Bhaskara Rao, chairman of the Center for Media Studies in New Delhi told The Guardian. “The government has decided that students are not patriotic enough and they will do something about it.”

For now, protesters must wait for Kumar’s trial and plan to continue their outcry: Rumors are circling that professors who facilitate classroom discussions critiquing the regime will be the next to be charged with sedition.