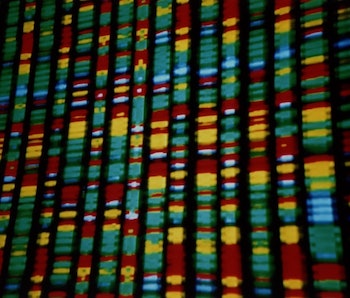 Obviously, not everyone is physically fit for space travel. Astronauts have to withstand the incredible force required to propel a rocket ship out of the atmosphere. They also have to be able to handle a zero-gravity and potentially low-gravity environment without getting sick or withering to the point of weakness. Yes, space travelers can train their bodies to prepare for these rigors, but training can get a person only so far. People have limits.

For technologists and entrepreneurs looking to make space travel part of the human experience, human limits are a hidden obstacle. That’s why Virgin Galactic can accurately said to be facing hurdles that NASA is not. Still, the both private and public efforts at space travel inevitably run up against the same issue: genetics.

Gattaca it isn’t, but there is a genetic filter when it comes to space travel. People with certain disorders like sickle-cell disease or cystic fibrosis can’t safely make the journey. And there are other, subtler genetic problems that surface as well — some of which are unnervingly common.

This kind of problem is highlighted in recent research into eyesight in space. For a while now, we’ve known that sensitive tissue can be pretty strongly affected by longterm missions. The eyes are the classic example. A new study published in January suggests that two specific genetic differences could explain why some astronauts in space experience vision problems worse than others, which is big news because these genes don’t manifest on Earth. This is just a small issue — its not as if the astronauts who were studied in that particular instance had experienced blindness or something — but it’s now easy to imagine other unnoticeable genetic issues becoming problematic in space.

Take cosmic radiation. Carcinogens, like radiation, are bad for everyone, but everyone is different. Some people are able to respond with better resistance to cancer-causing substances and come out OK, while others are more susceptible to those effects. That’s why not all smokers get lung cancer, and not all people who hang out in the sun all day contract melanoma. It’s also why it might take just a single dose of arsenic or just a short time living in an asbestos-ridden house to cause a tumor.

That’s part of the reason why space radiation is still preventing us from sending astronauts on long journeys. NASA will not send astronauts out to Mars or beyond unless it is confident it can limit the risk of cancer caused by cosmic rays to a very small probability. Even then, the risks might be still too big for certain people who could be more vulnerable to space radiation than others.

Unfortunately, the factors that might account for that increased risk are way too numerous for us to test for — at least right now. And that’s the same case for other effects of space habitation. Maybe someone’s gut microbiome reacts dangerously when they’re in a low-gravity environment. Maybe bone loss will happen more rapidly for some than others. You can’t really test for these things unless you know what genes to look for.

That’s why NASA is conducting its twins study right now. Astronauts Mark and Scott Kelly are identical siblings. Scott is currently finishing up his “Year In Space” aboard the International Space Station, while Mark has been on the ground the whole time. When Scott gets home, which should be on March 3, NASA is going to bring them both in and assess pretty much every part of their health that they are able to.

Why? Twins are genetically identical. So. ideally, any effects of longterm duration in space with a genetic cause would occur in both brothers. In this case, Mark was the control subject, while Scott is the guinea pig. NASA is going to pinpoint the most dramatic effects that a year in space have on the human body, and then the agency is going to go through the map of the genome to determine which genes might be responsible for those effects.

NASA is taking advantage of an opportune moment by conducting this study now — before space travel has really opened up larger to the public. Having “the right stuff” isn’t just about physical strength and mental willpower — it’s also about things that are outside our control. With the advent of gene-editing technology like CRISPR, however, we’re quickly approaching the capability to turn off the genes that keep us from making it into outer space. When that happens, the genetically cursed may be freed from their earthly bonds.