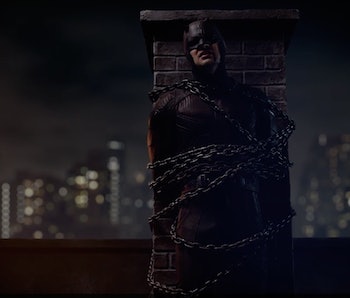 Nothing in the Marvel Cinematic Universe is a strict adaptation. Captain America: Civil War — which is out in May — is taking lots of liberties from the 2006-07 series Civil War, but it’s still keeping the spirit of that book’s themes and using similar imagery to pay homage. That seems to be the case for Season 2 of Marvel’s Daredevil, hitting Netflix on March 18.

A new teaser apes a memorable moment between Daredevil and Punisher from Garth Ennis’ run in The Punisher — titled Welcome Back, Frank — where Punisher has Daredevil tied up in a bad spot. While there will be differences from the book to the show — readers might notice that Daredevil doesn’t have his hands duct-taped to a pistol — it’s cool when TV and movies throw these bones to diehard fans.

In the book while Daredevil’s hands are in a bind, Punisher has his sniper aimed at a target a block away. Frank Castle is testing Daredevil: Kill Punisher, and his target lives. Don’t shoot, and Daredevil will have a death on his conscience.

Here’s how it looked in Ennis’ book:

That may or may not be the context of the teaser for the show, but hopefully, it means something just as significant if it’s having this much attention in the show’s marketing efforts.

Daredevil returns with Season 2 on March 18.