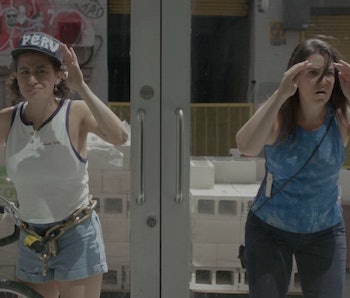 Broad City, the hit comedy series starring Ilana Glazer and Abbi Jacobson as an inseparable, unexpectedly compatible best friend pair living in New York City, returned last night for its third season. As two young women who thoroughly enjoy each others’ company while they try to navigate the longterm, the bond between Abbi and Ilana is a beautiful reminder of the importance of reliable friends who can make light of a shitty situation and help you laugh at yourself. Ilana’s highly adventurous, perma-stoned outspokenness meets Abbi’s anxiety-ridden bad luck in the most dynamic and lovable best friendship on TV in a long time. Part of what makes them so funny is the physicality in their comedy, and in last night’s episode, the girls returned full force with some of their best slapstick humor.

The premiere begins with a two-minute split screen montage of Abbi and Ilana wreaking havoc in their respective bathrooms, an apt reintroduction to the chaos of their world. Who knew you could do so many different things in the bathroom? On top of the normal toilet-related activities — taking a dump, plunging the toilet, putting on makeup, getting ready to go out — Ilana smokes a fatty and gets cunnilingus on the toilet while Abbi kisses her urine-soaked negative pregnancy test and devours a heart-shaped box of chocolates on her porcelain stump. Although Abbi’s bathroom behaviors might paint her as slightly less sloppy and more worried than Ilana, that contrast is what makes their relationship so much fun to watch. This dynamic is surprisingly clear when the two are in their natural habitats: the bathroom.

The slapstick continues full speed ahead after the opening montage, with several mishaps Abbi and Ilana encounter in their search for a public place to pee — a familiar frustration for city-dwellers. In a state of emergency, Abbi goes into a porta-potty at a construction site, but it’s crane-lifted while she’s inside of it. The site of a Port-a-John suspended in midair while Ilana screams and waves her hands beneath it is pure gold. Directly after Abbi escapes from the airlifted toilet, Ilana gets stuck to the back of a truck that begins to speed away. Ilana’s best slapstick comes out when she is in dire need of her best friend’s help — the visual is unforgettably hilarious.

Physical humor aside, Abbi and Ilana supplement their slapstick with some of the most original TV banter between friends. It’s the type of humor that’s especially funny to two besties, and that’s the kind of relatable experience that makes their relationship so accessible. I’m sure there will be some incredible one-liners to come, but the slapstick-heavy reintroduction to Ilana and Abbi’s world was the immersion we needed to kick off the new season.