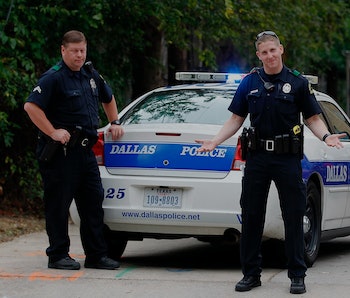 License and registration, please, and your choice of major credit card? When a Texas police officer walks up to your window at a traffic stop, they might be running more than just your ID.

Thanks to a new law passed last year, Texas police can install credit and debit card readers inside their squad cars and immediately take payment for outstanding fines to the court.

And now, they might not even need a traditional excuse to pull you over either. According to the Texas Tribune, Police in Guadalupe County, the City of Orange, the City of Decatur and the City of Kyle, Texas have arranged an exclusive deal with Vigilant Solutions, a California-based surveillance software firm, to trade licensing for Vigilant’s powerful license plate scanning software for their municipal records of drivers with outstanding court fines. According to The Electronic Frontier Foundation, the cops get to use Vigilant’s software, and Vigilant in turn takes their court data and turns it into “hot lists” of drivers with outstanding fines, which they feed back into the license plate scanning database. If a driver with an outstanding fine goes past a cop, the “hot list” pings them, and the cop pulls them over.

The driver is then faced with a choice: pay their fine, plus a 25% service charge (which goes to Vigilant), or go to jail. It’s a mutually beneficial relationship for both cops and Vigilant, as Texas State Government officials estimate there are over $1 billion in unpaid court fines statewide.

But for the civilians who are being scanned and swiped, the program raises severe privacy concerns. See, Vigilant has the deal worked out to take a 25% surcharge on court fees collected after using their software, but they also collect all of the data their software records as well. Researchers from the EFF see the use of local law enforcement as surveillance “data miners” as extremely troubling.

“Buried in the fine print of the contract with Vigilant is a clause that says the company also get to keep a copy of all the license-plate data collected by the agency, even after the contract ends,” Dave Mass, an EFF researcher wrote.

“Even though the technology is marketed as budget neutral, that doesn’t mean no one has to pay,” Maass wrote. “Instead, Texas police fund it by gouging people who have outstanding court fines and handing Vigilant all of the data they gather on drivers for nearly unlimited commercial use.”

Buzzfeed News has an in-depth look at one police department using the software, which could legally be used in any municipality in the state. The arrangement with Vigilant and Texas cops is just one symptom in a long list of the effects of America’s nationwide problematic relationship between major corporations and law enforcement.

In a world where your own home could be spying on you, privacy is quickly becoming a rare commodity, at home or on the road.

More like this
Science
10 hours ago
This nuclear-powered X-ray “flashlight” may help scientists probe the Moon for water
By Andy Tomaswick and Universe Today
Science
9 hours ago
Clean energy farms may endanger birds and bats — but the remains can reveal a solution
By Emma Foehringer Merchant and Undark
Culture
9 hours ago
A 2011 Jake Gyllenhaal thriller reinvented the time travel movie
By Alex Welch
LEARN SOMETHING NEW EVERY DAY.
Related Tags
Share: