The European Space Agency launched the Sentinel-3A satellite this week to fill a four-year gap in the monitoring of Earth’s oceans. The satellite is part of the ambitious $9.3 billion Copernicus Programme, which aims to take detailed readings of our planet’s health from above.

The ESA is tasking Sentinel-3A and its yet-to-launch twin, Sentinel-3B, specifically with monitoring the surface of the land and the oceans.

While there are other satellites currently monitoring the planet’s health, Sentinel-3 will provide more and better data than what has previously been available. They will fill a crucial knowledge gap that was left by the untimely demise of the Envisat satellite in April 2012, according to Met Office, the UK’s weather service.

“This is a quantum leap in terms of the amount of information that we can bring to bear on the problems that society faces today,” said ESA mission scientist Craig Donlon in a YouTube video.

One thing that Sentinel-3 will be monitoring closely is the surface temperature of the world’s oceans. This data is extremely important for climate change science, since it allows computer model projections to be tested against observed changes. Globally, sea surface temperatures have risen by an average of 0.13 degrees Fahrenheit per decade over the last century. The world’s oceans absorb the majority of excess heat due to global warming, and higher-resolution temperature data will mean better predictions of what will happen in the future.

More importantly, the Sentinel-3 will keep an eye on ocean surface temperatures, helping meteorologists figure out what the weather will do tomorrow or next week. Whatever is going on in the ocean has dramatic effects on weather on land — just think of this year’s crazy El Niño or the warm Pacific “blob” that has been causing weird weather events since it showed up in 2013.

Better satellite data means better information about when a big storm is coming, or if it’s safe to leave the umbrella at home. So remember — wherever you happen to be, on land or sea, Copernicus is watching you. 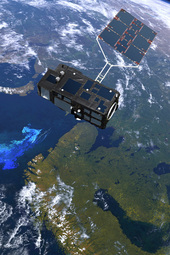 More like this
Science
Sep. 10, 2022
Chinese taikonauts just grew one of the most important staple crops in space
By Andy Tomaswick and Universe Today
Science
Sep. 24, 2022
Is a fact always true? A philosopher explains how to spot the difference
By Peter Vickers and The Conversation
Science
Sep. 23, 2022
Artemis I Moon launch may be delayed again — and NASA can't do anything about it
By Doris Elín Urrutia
Related Tags
Share: