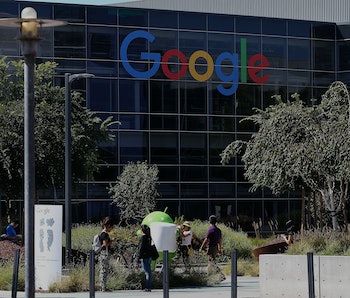 Google wants to make it easier to vote — at least, for American Idol. The tech giant recently won a patent for technology that enables it to provide a voting user interface (VUI) right from a search query.

One can easily imagine googling the presidential election and being able to cast your ballot right from the google.com search results, but the reality, at least for a while, may be a little more commercial.

The patent, though mentioning elections as a possibility, focuses on a made-up gameshow called Top American Singer. The technology enables anyone googling the show to vote for their favorite singer right from the search interface, rather than having to click away to a page to vote.

The patent also recognizes that Google can provide relevant third-party news results and links to candidate’s social platforms to provide supplementary information about the vote.

There’s no telling how secure the system could ever be, but Google may still be able to provide a valuable new service, especially to advertisers.

Imagine that anyone who googles “cola” receives a voting box that asks whether they prefer Coke, Pepsi, or no preference. Google can tailor ad sales to those companies based on whether they’re trying to siphon off some of their competitors or just want to remind you to pick up one of your favorite drinks at lunch today. These companies will definitely pay Google to make sure you view the message it believes will make them the most money.

The voting may even be a boon to search users as well, offering a way to engage with search results and even helping improve future results. Users could easily use the VUI to answer questions about their interests to help Google provide more relevant results in the future.

As of now, the only thing like the voting interface are the “Google cards” that are set to appear in search results for candidates in the 2016 presidential election. The company will permit major candidates to provide up to 14,400 characters and 10 photos that show up when someone googles their name. The priority results will be free to candidates and are supposed to give users “a new way to hear directly from candidates themselves,” according to a Google blog post on the topic.

So maybe it’s not a problem that Google plans to use the new voting patent to make some more money, because, when it comes to the important things, they just seem so damn trustworthy.