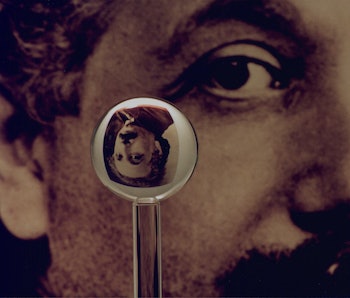 A team of scientists at the University of Southampton in England just immortalized information: The world’s most important documents will now — barring some utter cataclysm — last up to 13.8 billion years, ensuring that humanity’s history and discoveries never perish.

The information is stored on fused quartz discs, encoded with femtosecond lasers (independent pulses on the order of one-quadrillionth of a second), and interpreted with light, polarizers, and optical microscopes. The “glass” — fused quartz is, in short, pure glass; what glass wishes it could be — can contain up to 360 terabytes of data and withstand temperatures of over 1800º Fahrenheit. And at temperatures of up to 374º F, the information will last for as long as our universe is believed to have existed: 13.8 billion years.

It’s called 5D data storage — the size and orientation constitute two “dimensions,” and the three-dimensional nanostructures the other three — nicknamed the Superman memory crystal, and considered an eternal, portable archive. In early Febraury, the scientists presented UNESCO with a copy of the Universal Declaration of Human Rights stored in this format, and are excited to preserve other paramount documents — including Newton’s Opticks, the Magna Carta, and religious texts — forever.

The 5D storage of the UDHR represents how light technologies enable humanity to share ideas and information, gain inspiration and provide hope. The Declaration is one of the first digital documents to be stored this way — it could survive the human race.

This data storage capacity could soon be coming to a technology near you: The team is looking “looking for industry partners to further develop and commercialise this ground-breaking new technology.”

Check out the official announcement here.

More like this
Science
6.25.2022 4:00 PM
Voyager: 12 spectacular images from NASA's longest-lasting mission
By Jennifer Walter
Entertainment
6.29.2022 10:30 AM
25 years ago, Nic Cage made his most explosive sci-fi movie ever — it was almost even better
By Jake Kleinman
Culture
6.26.2022 12:30 PM
40 years, The Thing set a new standard for sci-fi thrillers — and accidentally inspired a modern movement
By Andy Crump
Related Tags
Share: