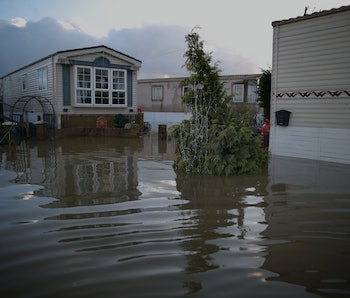 Ah, winter: still cold enough to make you miserable, quickly becoming warm enough to terrify everyone who prefers to live on dry land. NASA released their temperature data for January, and boy, it doesn’t look good. January of 2016 was the hottest January ever recorded, but it was also so much hotter than the prior January that it also goes down as the hottest temperature anomaly ever recorded. Oh, and before this year, January 2015 was the prior record holder for hottest January ever. January 2016 beat it.

Here are the numbers: January 2016 was 1.13 degrees Celsius (about 2 degrees Fahrenheit) warmer than the global average (and NASA’s benchmark) between 1951 and 1980, and a full 0.3 degrees Celsius hotter than January 2015. To put it this way — January is like the Usain Bolt of climate change right now. It already has the world record for highest temperature anomalies, but it decided to break it again this year by an enormous margin, just for fun. Or doom, in other words — temperatures at the North Pole rose to 0 Celsius, barely the freezing temperature of water.

“For the Arctic this is definitely the strangest winter I’ve ever seen,” Mark Serreze, the director of the National Snow and Ice Data Center in Boulder, Colorado told Mashable earlier this month.

And it wasn’t just the Arctic. The El Nino year and general warming across the world made 2015, as we expected, the hottest year ever.

Here’s a graph of what temperature data for January currently looks like.

That’s world wide, so the anomalies aren’t coming in just one region or being skewed by things like the “freak storm” that thawed out the Arctic. The data suggests that much of the Arctic was abnormally hot, but Southern Europe, Saharan Africa, and Northwestern regions of South America also got slammed with alarming heat waves.

NASA, scientific to the last, accounts for some variation in their instruments over the years. Still, they’re 94 percent certain that 2015 was the warmest recorded year in history. And unlike Usain Bolt, who’s beginning to pass his prime and slow down, climate change is only getting faster. We’re in for a lot more record-breaking, Christmas-flooding, Arctic-melting heat in the future.