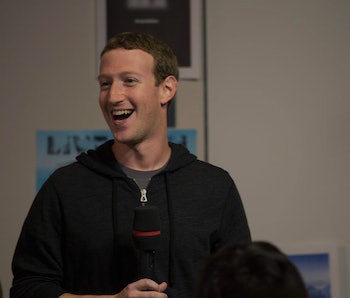 Mark Zuckerberg is embarking on a European tour, and announced on Sunday night that he will stop in Berlin, Germany to host one of his occasional Facebook Town Hall Q&As on February 26.

Before these events begin, Zuck takes to his own Facebook page for material. Supplicants flocked to his Facebook-announcement post, eager to be acknowledged by the unassuming demigod, and, if they were truly pious, followed his specific decrees as closely as possible. “If you have a question you want me to answer in Berlin, comment below or like the questions you want me to answer” (emphasis added).

These are not the posts in which verified accounts are necessarily privileged, rising as does cream to the top of the virtual milk. This is the stuff of democracy, my friends, and it’s really quite simple: if your idea for a question is good enough, it will get many likes, and next thing you know — come February 26 — Zuck Himself will respond to you.

Here were some of the more memorable questions posed to Zuckerberg about Facebook on Monday:

This particular Town Hall comes on the heels of a major Facebook facepalm: Zuck and co. were really hoping that India would just swallow the Free Basics / Internet.org pill like the good patients they’ll eventually, inevitably become. But India, via its Telecom Regulatory Authority, spewed the plan’s contents back whence they came, deeming the Free Basics program a violation of net neutrality. It’s therefore reasonable to presume that Zuck’s going to be touting the program’s merits, illuminating exactly why India’s decision strikes him as a shameful, inconsiderate, inhumane disappointment.

Another likely topic of discussion will be Zuck’s A.I. baby. Surely the masses are curious about such an endeavor and Zuck’s progress to date.

And most of the remaining questions, no doubt, will revolve around, well, Facebook. How it works, what its future looks like, how much money it makes, what could be improved about its services, et cetera. The mundane bits.

But thus far in the comments — and, notably, elsewhere: on Twitter — we’ve found some true gems, gems far more worth Zuck’s edification than any reasonable, practical question. Behold (read from the bottom):

Back on Facebook, the reactions to Kanye were mixed.

There were some truly heart-wrenching comments in the mix, too:

You can watch Zuck’s town hall live on February 26 at facebook.com/qawithmark.