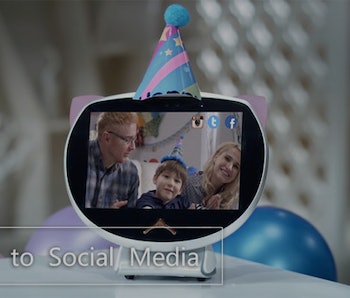 Xibot, the newest digital home assistant on the market, has received more than twice its Indiegogo target commitment of $10,000 and is well on its way to the factory floor at none other than China’s Foxconn.

Finding a reliable supplier has led many a hardware startup to an early death, so the partnership amounts to a major vote of confidence in Xibot, which is competing in a packed market, full of big name competitors like Amazon’s Echo.

While Foxconn is known as the supplier for the world’s largest tech products like Apple’s iPhones and iPads, it has increasingly moved to invest in individual products to decrease its reliance on foreign contracts to stay afloat.

And Xibot is making the most of its high-profile connection. Foxconn features prominently in its Indiegogo campaign video and appears several times in the product description.

The company may just be concerned that American consumers are still weary of off-brand Chinese tech after the recent fad of hover boards turned out quite a few fiery duds. So Foxconn at least signals reliability, which is essential when asking people to fork over $249, even more than they would pay for an Echo.

Xibot contains a lot of the same features as the Echo. It’s voice activated, can serve as an alarm clock and send text messages and take pictures on command.

Xibot can, however, move autonomously on wheels and is always wearing funny, little silicon ears, making it feel more like a high-tech cat than an Amazon assistant. The designers were clearly going for the family market when thinking about the product’s niche, and the Foxconn messaging does produce a little dissonance on this level.

Foxconn is perhaps as famous as a reliable producer of tech products as it is an alleged abuser of its employees rights. Reports about the quality of its working conditions leading to employee suicides have filtered out from the company’s massive factory “campus” ever since it became well-known as a manufacturer of Apple products.

It’s no question that Foxconn’s endorsement of the Xibot is a major coup for the startup. But even Apple has had to face down some pretty nasty publicity for partnering with the production giant, so it’s a new strategy to see a company selling Foxconn as more than just a production but also a marketing asset.

Families will either consider Xibot because of or in spite of its Foxconn connection. The answer will determine the fate of the otherwise adorable little creatures.

More like this
Innovation
9 hours ago
50 years ago, the U.S. and U.S.S.R. joined forces to ensure astronauts could survive in space
By Allie Hutchison
Innovation
5.23.2022 9:00 PM
How a genetically-engineered tomato could help solve a global health crisis
By Claire Cameron
Innovation
5.21.2022 2:30 PM
46 years ago, one video game innovation modernized the industry — and traumatized a generation of gamers
By Zack Kotzer
Related Tags
Share: