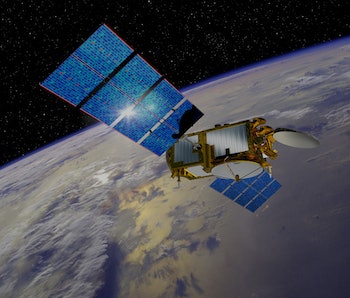 Satellites in outer space will soon provide broadband internet to some remote regions of the world, thanks to a company called ViaSat, in partnership with Boeing.

By 2019, three ViaSat satellites will dispatch a whopping one-terabit internet connection to obscure residential areas in the Americas, Asia, Europe, the Middle East, and Africa. They will also provide connectivity to airplanes in flight and even maritime vessels in the middle of the oceans, which have always previously been drastically removed from anything approaching broadband.

Presently in development at Boeing, ViaSat’s three-satellite system will reportedly offer double the capacity of all the 400 communications satellites already in orbit around the Earth combined. It’s existing technology, just re-executed to be way more efficient.

Ubiquitous connectivity is an essential step in modernizing the world at large. Facebook and Google each have their own ambitious plans to bring broadband to remote regions using weather balloons and drones. The aim is to bring commercial development, education, and — let’s face it — Netflix to faraway parts of the world that presently have no reasonable way to enjoy these things.