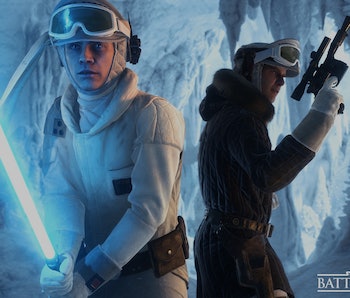 Released in November of last year, Star Wars Battlefront was supposed to be the revival of the franchise that loyal fans had been waiting for years to play — throwing players into the shoes of heroes like Boba Fett and Luke Skywalker, the cockpit of X-Wings and Tie Fighters and the battlegrounds across Endor and Tatooine. Ever since the development started, DICE promised to deliver across the board for Star Wars fans, and for the most part? They delivered.

It’s no secret that Star Wars Battlefront is a gorgeous game, modeled after the real-life locations used to film the original trilogy. They also used the same sounds from the original trilogy for most of their effects along with aspects of the game modeled from the same materials used in the films — which, honestly, takes a significant amount of time to accomplish. The problem with this significant attention to detail, though? It really limits the content the studio was able to work on with its timetable.

Battlefront is not really the game loyal fans of the series were looking for as a result, missing A.I. battles, a single-player campaign and space battles entirely. There are many other aspects of the game lacking content, as well, but hey — at least it’s pretty.

The hope was that Battlefront would expand on the original game with the DLC included in the $50 season pass, possibly adding in content from the new film or even the prequel trilogy as the previous installments in the franchise had, but it looks like that’s not going to be happening.

During EA’s quarterly earnings call in late January, EA chief financial officer Blake Jorgensen essentially confirmed that Battlefront will not be content outside of the original trilogy — EA is open, however, to including characters and stories from the prequels and the new trilogy in future Star Wars games.

So it looks like if players want to experience more from the Star Wars universe, they’re going to have to wait for the release of Star Wars Battlefront 2 in the near future.

Honestly, it’s not the best decision EA could have made — especially considering that the game is already light on content when it comes to maps, modes and heroes, as we’ve previously discussed here on Inverse.

It’s safe to say that the extended time periods would have given Battlefront plenty more to work with for the base game, letting DICE dive into The Clone Wars and possibly even The Force Awakens to release some memorable and more content-rich DLC. This could have helped DICE expand the weaponry, hero units and map variety — which are some of the chief complaints from those playing the game. Granted, the decision to expand the timetable would require more research and some additional development time — but I think it’s fair to assume that Battlefront fans would be happy waiting for more sizable chunks of content that add more depth the game currently lacks.

EA has announced that the season pass will be bringing us to the Outer Rim, Bespin, and the Death Star this year though — which could shape some depth into the game utilizing the original trilogy’s limitations, but if the current state of the game is any indication? It may not be enough. I suppose we will just have to see how the season pass shapes the game in 2016.

More like this
Gaming
5.11.2022 4:00 PM
Skywalker Saga made one of Star Wars' worst characters even more awful
By B.C. Wallin
Gaming
5.11.2022 6:12 PM
Jedi: Fallen Order leak exposes the worst thing about Star Wars
By Hayes Madsen
Gaming
8 hours ago
You need to play the most overlooked horror game of all time on Switch ASAP
By David Grossman
Related Tags
Share: