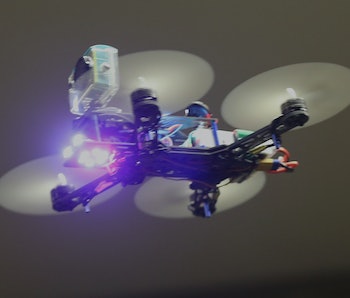 For the first time in history, non-states could operate their own private air forces, thanks to common drone technology.

That’s the conclusion Canadian military strategic analyst David Rudd comes to in a report published in the Journal of Military and Strategic Strategies. Rudd notes that maritime non-state actors, or MNSAs, could use drones for weapons delivery, surveillance, and a host of maritime threats we can’t yet predict.

When we say MNSAs, it’s worth remembering that that includes pirates, drug smugglers, and terrorist organizations. Rudd writes:

While the Islamic State (IS) is not a littoral-based organization, its use of heavy weaponry captured from the Iraqi army further illustrates the potential technical proficiency of non-state actors. This, combined with the availability of drone technology for surveillance and possibly weapons delivery, means that lethal encounters with state parties do not necessarily have to be at close quarters. … The proliferation of drones could radically alter the tactical battle space. For the first time, non-state adversaries would have an air force.

A few insurgent groups like the Tamil Tigers actually already operate a very small number of planes, but nothing on the scale of what a group could accomplish with drones, which are cheap and require such little room to launch effectively that even our own Navy is designing tail-sitters to turn small ships into miniature aircraft carriers.

Rudd’s predictions to the Canadian military are not without silver linings. Cheap drones could keep Canada’s navy forces affordable, and be outfitted with sensors to detect enemy incursions. The only way to stop a bad non-state with a drone is with a good real-state with a drone.

More like this
Innovation
Sep. 21, 2022
Look: Drones could be the future of 3D-printed architecture
By Jennifer Walter
Science
Sep. 24, 2022
Is a fact always true? A philosopher explains how to spot the difference
By Peter Vickers and The Conversation
Science
Sep. 23, 2022
Ancient DNA reveals the shocking scale of Anglo-Saxon migration
By Jennifer Walter
Related Tags
Share: