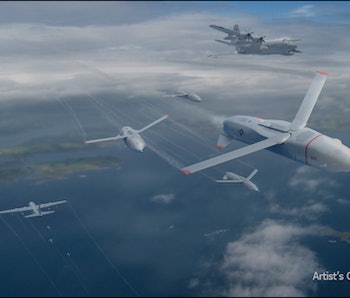 At this point, drones have become a normal part of how the U.S. military conducts its operations. But that also means the country’s enemies and rivals have quickly learned how to avoid and even directly engage drones and make them ineffective. So to shake things up, the Department of Defense’s research agency, DARPA, has announced the launch of the Gremlins program.

Yes, that’s the actual name. The agency’s announcement claims to have plucked the name from the “imaginary, mischievous imps that became the good luck charms of many British pilots during World War II,” but the rest of us know better — DARPA honchos are big fans of the 1984 movie. The planning of the program probably went something like this:

All joking aside, the Gremlins program is quite the novel endeavor. Modern military aircraft is insanely expensive. Watching a predator drone get shot to bits in the air, or having it irreparably malfunction means losing hundreds of millions of dollars. And because costs are so high, it’s much more difficult to get several of them ready for a single mission.

So DARPA’s new program is looking to develop cheaper drones, where several could be used to create larger swarms. Each would only have a lifespan of maybe 20-uses — a low number for sure, but a negligible loss if they can be manufactured and launched at a fraction of current costs.

The Gremlin drones would occupy a niche between equipment like missiles, which can only be used once, and fighter jets, which stay in service for several years on end. Gremlins would be launched in groups from bigger aircrafts and provide something of a support role to those planes. After the mission, the drones could be retrieved and prepped for the next mission relatively quickly — under 24 hours at least.

Cheap reusable drones have been on DARPA’s radar for some time now. Earlier this year, the agency put out a video detailing a concept where a drone acts as a scout for a transport plane, detecting targets farther ahead, and allowing a swarm of drones and misses to attack the enemy.

The Air Force has been looking for proposals in low-cost drone technology as well.

How well Gremlins would be able to act in concert, however, is unclear. Swarm dynamics in robots are a very new part of robotics. But with the amount of money the military throws around for R&D projects of all kinds, researchers could solve this mystery pretty soon.

One can only hope that they also come in the insane variety the critters in Gremlins 2 came in as well.

More like this
Innovation
21 hours ago
Scientists may have revealed the ancient secret behind China’s Bronze Age
By Sarah Wells
Innovation
8.9.2022 11:00 AM
This self-healing material could fix your dinged-up car in 30 minutes
By Molly Glick
Innovation
8.8.2022 10:00 AM
A wild new plane-train hybrid could whoosh you to your destination — if it can get off the ground
By Molly Glick
Related Tags
Share: