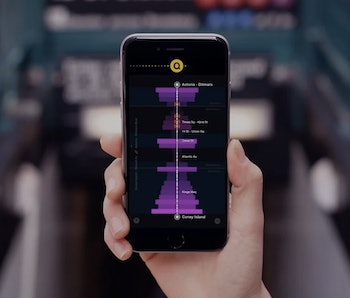 Tourists and residents alike have lamented their inability to send and receive text messages, refresh Twitter, or generally take their mind away from the inanity of subway rides in New York City ever since smartphones became commonplace. They can lament no more: there’s now an app that tells you which trains and subways stops to avoid.

Subspotting is an iPhone app that tells you in advance what your service will look like on your weekend trip to Central Park or your weekday commute to work, and it has data on each of the four major cell phone carriers — Sprint, Verizon, AT&T, and T-Mobile. On top of that, both the app and the website will present you with beautiful data visualizations. Everything is easier with beautiful data visualizations.

Not a single subway line or station is left out of the mix. That’s a lot of data: Twenty-one trains, 469 stations, and 660 miles of track. During the data collection process, Subspotting picked up data every two seconds, which, all told, generated 1.7 million data points. Among the major findings: the 7 train is the most connected at 80 percent and the G train is the least connected at 12 percent. (Which any G-train rider could have told the app’s creators.)

Now, while this is helpful for the time being, it may be rendered irrelevant in the future. New York Governor Andrew Cuomo says he’s pushing for wifi in every underground station, and the process is already underway. (“By ensuring that subways stations throughout the city offer full wifi capabilities, we are not only improving rider experience, but also making public transportation a more viable option for those who work in and around our city,” Cuomo says.) Transit Wireless, the company behind the upgrades, is on the case.

And though the subway tunnels themselves will likely remain in the void for a while, it won’t be long before practically everywhere else in New York City is connected. Over the next couple years — in addition to the underground subway station wifi — NYC will be getting free, public, warp-speed wifi all around the city via LinkNYC kiosks, or “links,” as the company refers to them.

Here’s the full rundown of the most-connected lines:

More like this
Science
Feb. 5, 2023
AI Is Smarter Than Ever – But Some Problems Still Stump Today’s Computers
By The Conversation and Jie Wang
Science
Feb. 4, 2023
Why ChatGPT Could Usher in a New Era of Scientific Discovery
By Brian Lucey, Michael Dowling and The Conversation
Gaming
Jan. 25, 2023
"Mindboggling" Launcher layoffs prompt outcry and tributes to WaPo gaming vertical
By Jess Reyes
LEARN SOMETHING NEW EVERY DAY.
Related Tags
Share: