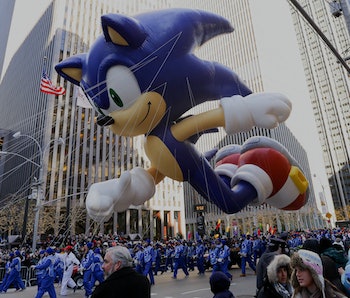 In an interview with The Worldfolio, Sega Sammy Holdings Inc. CEO Hajime Satomi revealed a partnership with Sony Pictures to produce a live-action/CGI hybrid motion picture starring Sonic the Hedgehog. The projected release for the film is scheduled for sometime in 2018.

“Sega Sammy Group is currently planning with Sony Pictures to create a live-action and animation hybrid Sonic the Hedgehog movie scheduled for release in 2018. Like with this CG animation production, we would like to expand our business into other entertainment areas beyond what we are currently involved.”

This isn’t the first mention of a Sonic movie that is combining computer animation with live-action. In 2014, Sony and Sega announced they enlisted Japanese animation studio Marza to bring the character to the big screen. It is unknown if the movie Satomi is referring to is the same production or a replacement, and little else is known about the film.

Sonic the Hedgehog was Sega’s company mascot that starred in many successful video games and cartoon TV shows throughout the 1990s, and considered a direct competitor to Nintendo’s Mario. In recent years, Sonic’s popularity waned from mainstream pop culture due to Sega’s diminished market share in the industry, as well as the mediocre quality of recent Sonic video games. But Sonic retains a loyal, if sometimes bizarre and oft-ridiculed fanbase.

But the official Twitter is self-aware comedy gold. Totally worth following.

More like this
Gaming
5.1.2022 4:31 PM
Everything we know about Ichiban's return to the dangerous world of Yakuza 8
By Joseph Yaden
Culture
5.7.2022 8:00 PM
Studio Ghibli films have a subversive message hiding in plain sight
By Yuan Pan and The Conversation
Entertainment
5.5.2022 11:30 AM
You need to stream the most overlooked time-travel movie ASAP
By Dais Johnston
Share: