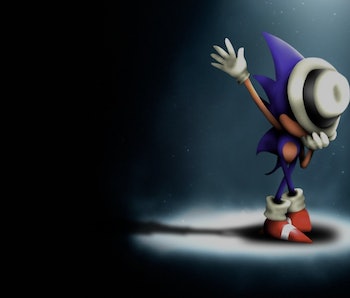 This week a Huffington Post investigation into a popular fan theory confirmed that Michael Jackson worked on the music for the video game Sonic the Hedgehog 3, a rad Sega Genesis title released in 1994. The main sources for the story are composers claiming to have worked with Jackson on the project, in particular Brad Buxer, a well-known Jackson collaborator. This revelation is a surprising narrative twist to a fan-fed saga that Sonic obsessives had been batting around since 2006. It began when Sonic fan forums noticed similarities to Jackson’s music — in particular “Stranger and Moscow” and “Jam” — and, being ’90s kids and all, the fans became engrossed with the possibility of their two favorite cultural franchises linking arms.

Something seems off, however, about Jackson’s decision to remove himself from the credits. Here’s the rationale posed by Buxer, via HuffPo:

“Buxer, Grigsby and Jones say Jackson pulled his name from the game — but not his music — because he was disappointed by how different the music sounded on Sega’s console when compressed from that ‘high profile’ sound to bleeps and bloops.

“‘Michael wanted his name taken off the credits if they couldn’t get it to sound better,’ Buxer claimed.”

Given that Michael Jackson had released a number of Sega games based off his 1988 film Moonwalker, it seems unlikely that he would chafe, all of a sudden, at Sega’s audio specs when bigger hits like “Thriller” were adapted for less powerful systems in the Moonwalker games. More likely is the scenario in which controversy interfered, which the Huffington Post article touches on: Evan Chandler accused Jackson of molesting his 13-year-old son, Jordan, in the summer of 1993, about a year before Sonic 3 was released. His involvement would have likely put a dent into the sales of Sega’s flagship franchise and may have been omitted for that reason.

Whatever the truth may be, this conspiracy will be remembered more as a story of a bunch of kids obsessing over something so much that they basically manifested a connection, and won’t be remembered for the music. Because, listen folks, better game music was being made elsewhere.

Now, to unpacking other mysteries. Will Sonic and Tails ever kiss?

More like this
Entertainment
5.12.2022 6:34 PM
The secret reason Christopher Walken was destined to play the Emperor in Dune: Part II
By Ryan Britt
Entertainment
5.18.2022 9:36 PM
Kate Siegel says Netflix’s Fall of the House of Usher is “like nothing anyone has ever seen”
By Dais Johnston
Entertainment
21 hours ago
Doctor Strange 2 special poster reveals a terrifying deleted scene
By Jake Kleinman
Share: