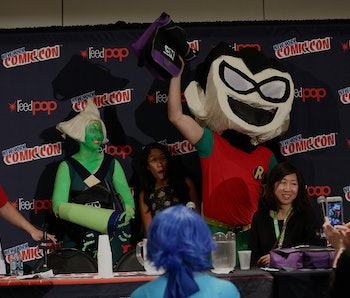 “I really want to get New York Comic Con all over the city.”

That’s what Lance Fensterman of ReedPOP, the organizers of New York Comic Con (NYCC) and other conventions worldwide told ComicBook.com in a recent interview. Fensterman discussed ReedPOP’s mission to spread New York Comic Con across the city. In doing so, ReedPOP announced the end of NYCC’s sibling convention Special Edition NYC, an early summer event that was devoted exclusively to comics.

The expansion strategy comes not from ambition, but necessity. “There’s such a demand for tickets that we can’t satisfy,” Fensterman explained. “We want more people to be able to enjoy the show. For those people that are at the show, we want more content. More stuff for them to do. More of what they crave and love. Our canvas is pretty packed right now if our canvas is just the Javits Center.”

NYCC is indeed getting too big for the Javits Center, located in Manhattan. The center has housed Comic Con since 2006, but any attendee will tell you how much of a hellish gamble buying passes has become lately. Attending the convention itself is another beast, with hundreds of thousands of people packed shoulder-to-shoulder in the 12th-largest convention hall in the country. Amid the TV, movies, video games, and Hollywood celebrities that clutter the convention, fans began to yearn for something smaller and more intimate.

In 2014, ReedPOP created the spin-off event Special Edition NYC, which focused purely on comic books. From my visit there, I can say the event’s organization wasn’t sharp, but it was still a nice alternative to the white noise of NYCC. Shorter lines meant easier conversation with writers and artists, and the absence of movie and television hoopla created a chill atmosphere that, for once, celebrated the actual comics.

In the last few years NYCC hosted more attendees than the San Diego Comic-Con, which in 2014 hosted approximately 130,000 people. Last fall, New York saw a whopping 170,000 attendees. Based on the convention’s history, that number can go only higher; the table below from Wikipedia illustrates NYCC’s rapid and continual year-to-year growth.

Expansion for the building itself is a possible option, but Fensterman believes it would make conditions during the convention worse in the interim. Expansion into the city began last fall, when USA’s Colony held a screening and Q&A at the Hammerstein Ballroom several blocks away.