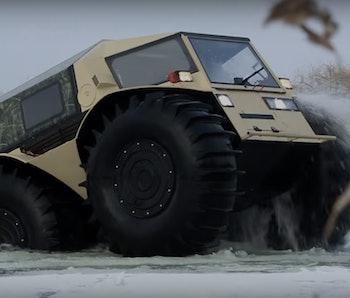 This is the SHERP. It’s here to drive over everything and chew bubblegum, and the guys who built it are all out of bubblegum.

Have you ever looked at some foreign, rugged, inhospitable terrain and thought “boy, it would be nice if I could drive across that”? Because a group of Russians, led by “genius technologist” Aleksey Garagashyan thought that, and then they built this thing.

The SHERP costs $65,000, which if you think about it is a tiny price to pay for the unholy mutant baby of a monster truck and a tank. For that price, you get a 3,000 pound vehicle with a 44-horsepower 1.5-liter Kubota diesel engine that can go 28 miles per hour and hop over obstacles of almost 5 feet. Oh yeah, and it can also drive on pretty much everything.

Snow? It’s Russia. Yes, it can drive on snow. Buy one before the next Snowmageddon hits.

Ice? Very fragile, probably-shouldn’t-drive-a-car-on-it-ice? Yeah, not a problem, because it drives on water too.

Lava? Well, no. The SHERP’s tires are self-inflating, but they would probably melt on lava. Don’t try to drive on lava, even if you have a SHERP.

The SHERP comes as either a hard-top or soft-top, just in case you want to take the roof down and enjoy a nice breeze while you’re rampaging through the devastated wastelands of the apocalypse or taking a nice leisurely drive across a major river. Yes, it’s essentially just a giant steel box with an engine inside powering four enormous wheels, but the light weight and skid-steer system mean it does donuts as well as anything we’ve seen since that self-driving DeLorean from October. Check out the full video of the SHERP in action here:

More like this
Innovation
6.24.2022 5:00 AM
Beam-steering radio technology could help autonomous cars finally hit the road
By Sascha Brodsky
Innovation
2 hours ago
A single color is reason enough to buy a Jaguar XF
By Jordan Golson
Innovation
7.2.2022 6:00 PM
Are self-driving cars safe? The tipping point rests on a psychological illusion
By Jean-François Bonnefon and The Reader
Related Tags
Share: