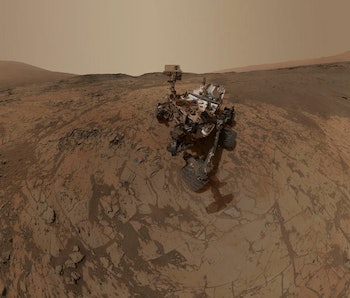 It’s amazing the difference a week can make for technology. Just a few days ago NASA’s Jet Propulsion Lab released a 360-degree video of Mars from the Curiosity rover that was (to put it gently) unimpressive.

Well, the little rover has sent us some new images that amount to a much more precise view of the Mars it lives and works on everyday. NASA used technology developed at Facebook and Oculus Rift to stitch the images into a 360 degree video.

Scrolling around in all directions, you can see Mount Sharp on the horizon, as well as Namib dune of the large “Bagnold dunes” that blow across the planet’s surface at a rate of three feet every year.

While NASA did adjust the colors to make it look more Earth-like, the video does seem to give a good idea of what it would be like to stand in the place of the Curiosity rover and look around.

Now, we just need some VR glasses to make our Mark Watney daydreams come to life.