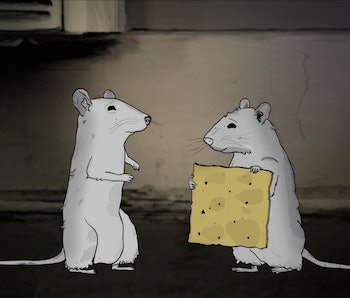 Before heading to a party, you may experience some anxieties about the night ahead.

Are you going to bring food and drink, or will you quietly mooch off other people? Will there be friends of yours there or will you have to make some new ones? And then there’s the holy grail of party anticipation, the classic and brotastic end goal: getting laid.

Socializing in an unfamiliar environment can be excruciating.

In the pilot of HBO’s newest animated series Animals — created by Phil Matarese and Mike Luciano and produced by the Duplass brothers — the downtrodden rats of New York City assume these anxieties while humans are shoved out of the picture.

Each episode of Animals focuses on the experiential woes of a different kind of species in New York City — vermin, birds, insects, domesticated animals, and so on. The show’s continuing gimmick is that since only humans are capable of experiencing these issues, it’s unfamiliar and surprisingly funny to reimagine stepped-on city creatures as the ones who must sort through these dilemmas. Matarese and Luciano tweak these struggles slightly, though just enough to keep the animals rooted in their “natural” habitats. In the pilot of Animals, party-going rats aren’t concerned with getting laid but the rat version of that — making babies.

To get us in the right headspace for the remainder of the show, the first episode immediately reverses the roles of humans and rats — humans are disgusting, and rats are insightful and emotionally aware. The episode opens on two humans having a dirty romp in a dilapidated building as Phil and Mike — the rats — watch them from the corner, disgusted by how ungraceful the scene appears. From that point on, humans are out of the picture. They got only one shot, and they soiled it. Welcome to a rat’s world.

Phil, Mike, and their third rat friend, upon arriving at the party, start bro-ing out about their latest baby-making ventures, in the same way that testosterone-fueled men may do the same. It eventually comes out that Phil has never made babies and that this party will serve as a major opportunity to impregnate a female rat. The virgin-on-a-quest-to-get laid storyline has been done ad nauseam, but the new focus — the rats — subverts the trope in a clever way that shrewdly highlights how annoying people can be in this same situation.

The show’s animation is purposely shoddy, just estimating the movements of the creatures rather than following them exactly. While it was initially difficult to engage with the animation style, the voiceovers by Matarese, Luciano, and their notable guest stars (Nathan Fielder, Nick Kroll, and Katie Aselton) primarily carry the show forward. The minutiae of these performances are remarkable — from the organic delivery to the way the actors will talk over each other from time to time. It feels like an experience of which we’ve all been a part, except we’re watching rats live it out.