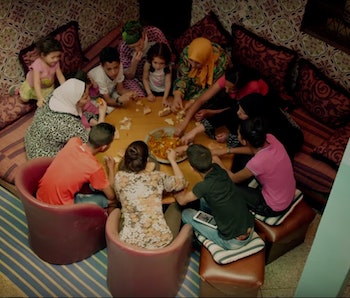 Introducing a new cooking show with a lot of heart. Netflix has released the trailer for its new four-part documentary series Cooked, which follows award-winning food writer Michael Pollan as he explores the history and universality of cooking across cultures through four basic lenses: fire, water, air, and earth. The show is based off Pollan’s 2013 book of the same name that considers the wide-reaching cultural impacts of cooking and traditions of food preparation. Ultimately, the book serves as a resounding push to get back in touch with our roots and restore balance to our lives by cooking more, as will the upcoming show when all of its episodes are available to stream on Netflix on February 19.

As far as cooking shows go, Cooked stakes its claim in the evergreen humanity and love that are inherent to culinary practices, rather than focusing on specific recipes or meals. Prepare to see something totally different from Ina Garten’s journeys in making meals from only butter, with much less bad-boy than Anthony Bourdain’s No Reservations — but with a similarly didactic and enlightening global perspective.

The trailer kicks off with Pollan extolling the way food serves our memory — the smells, methods of preparation, and eating rituals remind us of family, love, and the comfort of being fed that we instinctively crave. Continuing with this tender approach, the footage moves through clips of people from all over the globe explaining the depth of their personal connections to the food they cook, magnifying the universality of a tradition as timeless as cooking. On the other hand, the series will investigate the phenomenon of becoming separated from the experience of cooking and letting large corporations take over. Over an uplifting, cinematic composition of strings, Pollan proudly affirms, “When we learned to cook is when we became truly human.” Cooked, then, is encouragement to get back to that truly human place.