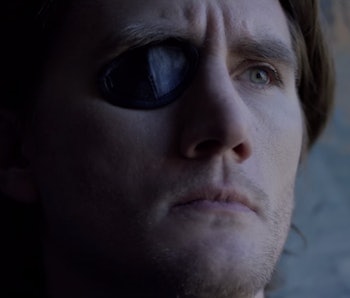 Jason Trost is living the second act of a real-life sports film; training hard after having previously gotten his ass handed to him. But Trost is not aiming to win against a rival hockey team or make it to Nationals. He’s taking on the whole indie film industry.

By all accounts, Trost’s The FP should have put the Writer-Director on the map. The 2011 film tells the story of a turf war between two rival gangs—the 248 and the 245. Their weapon of choice? Beat-Beat Revelation, a video game similar to Dance Dance Revolution.

The FP could have been for Trost what Evil Dead was to Sam Raimi, or Clerks to Kevin Smith. Had the dominoes fallen differently, Trost might have graduated to claim his own corner of the Marvel Cinematic Universe. But that never happened.

The nitty-gritty of it is not a topic Trost necessarily wants addressed.

“[It] is such a long-winded frustrating story I’d rather not get into fully,” Trost writes us via email. “Let’s just say we had some producers that really didn’t have our back.” Produced for a measly $45,000, The FP went on to fumble its international distribution. Thought to have caught lightning in a jar, the cult film turned into a glaring loss for its investors. “When you make a movie that is a critical and financial failure, that doesn’t exactly get financiers and production companies very excited.”

Adding to his frustration is the fact that Jason saw his brother and collaborator Brandon enjoy a burgeoning career after The FP. Though Jason stresses he is happy for him, it left Jason in the dust. “People with power assume anything that might have been good was because of him. After The FP, I had to start my career over from scratch. I blew all my money, connections, and favors on The FP.”

What Trost did still have left was a phenomenally loyal audience which still sees him as the second coming of Raimi. It was through their support that Trost managed to dust himself off, crack his knuckles, and gather what little he had left to make his next projects, All Superheroes Must Die and Wet and Reckless.

Returning from the brink of obscurity, Trost is currently fundraising via Indiegogo for Beats of Rage: The FP Part II, the sequel to an original that divided critics, united fans, and left its creator a single-player.

On Indiegogo, you said you didn’t want to make movies you “like,” but movies that you love. What was missing in making your other films that you had making The FP?

Money and help, really. With The FP, I was developing it for years, and I loved it. I created a whole universe. It was going to be my Evil Dead, for lack of a better comparison. But every movie since has been me scrounging up whatever change and trash I have at my disposal, staring at it and thinking, “What can I make with these limited puzzle pieces that still resembles what I want to do?”

I don’t like to sit on my ass and complain about why I’ve never been “discovered” so I figured I’d rather make a bunch of potentially shitty movies that could garner me a bunch of experience, so that when and if I got my next title fight, I would be ready. Beats of Rage is my title fight. I’ve trained enough. It’s time to come back down from the mountain top and do battle once again.

What tools or lessons as a filmmaker have you learned since The FP that you hope to use in Beats of Rage?

Experience. Everyone on Twitter will tell you they know how to make a movie, but saying you can make a movie and actually making a movie are two very different beasts. And the only way you truly learn how to make a movie, is by making a lot of movies. Beats of Rage will show my growth and experience as an “artist”. This one is my Road Warrior. Sure the first Mad Max was cute, but Road Warrior was why we actually love Mad Max.

He will face a challenge bigger and far more personal than anything we’ve ever seen before. This one is much more of an epic journey. Let’s just say we spend more time away from the town of The FP than in it. I really don’t want to reveal to much more than that for your benefit.

Does the title, evocative of the 2D fighters Streets of Rage, indicate anything about the story? Are you leaning more towards kung-fu/action movies or is it just a title?

Yes and yes. But instead of kung-fu, let’s say Shaq-Fu. For me this movie represents what I loved about the Super Nintendo era. Think if Final Fantasy had a baby with 8 Mile, you might be in the ballpark of what we’re going for.

The influences of The FP were clear: games like Dance Dance Revolution, Def Jam Vendetta, and ‘80s and ‘90s arcades. Is Beats of Rage leaning into that again, or is it going in a different direction?

Those will all still be very much alive and well. We’re still making fun of how stupid white people can be. But we’re also going for more of a Heavy Metal/Conan vibe this time.

Besides protagonist JTRO, who else from The FP will be returning for Beats of Rage?

Again I don’t want to blow too much here, but I can say KCDC and BTRO for sure… beyond that, you will finally get to meet JTRO’s father NITRO. That’s when shit gets hot.

All right, weird question, but is the cannibal JTRO in This Is the End canonical?

You know your trivia! I don’t see why not. Whether that falls in the universe’s timeline is beyond me.

The Indiegogo goal for Beats of Rage is a thick $100,000. Does that mean the film’s scope will be much bigger than The FP? Or is it production security?

The scope is twice the size so we need twice the budget. Production security? I don’t even know what those words mean anymore. Give me a camera and we’ll just make it.

Of course if Beats of Rage is funded, we’ll all get to see it. But do you think that will make producing The FP 3 any easier?

I really think so. A lot of what was hard about coming back to this movie was me thinking that no one actually wanted a sequel. You see enough Twitter hate and financial spreadsheets and the excitement just fades away. But after a long enough time, thanks to fans all over the world, I’ve discovered that I couldn’t be more wrong. People actually, violently want a sequel just as much as those who violently don’t, and that really excites me! I think this time, not having to worry about recouping a budget, will lead us to a lot of more exciting, wider release possibilities. It will also lead us to holding back zero punches with how crazy this one will get.

So, what’s next? Have you also started on All Superheroes Must Die 2?

Well Beats of Rage is next I hope! All Superheroes Must Die 2 is nearing completion in post production. It’s an entirely different beast than anything else I’ve ever made and it looks like it will be getting a release this summer.

The Indiegogo fundraising campaign for Beats of Rage: The FP Part 2 is now online.