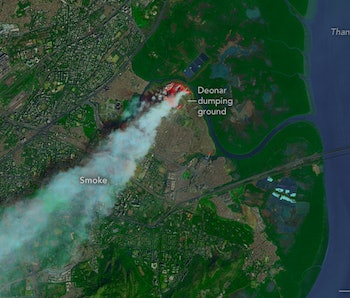 Nearly 100 feet of stacked waste is on fire in Mumbai, India’s Deonar garbage dump, a blaze so large you can watch the Indian trash burn from space.

It’s still uncertain what caused the fire on January 27, but it took 14 fire trucks and eight bulldozers four days and nights just to contain it. The dump receives roughly a third of the city’s waste, giving the spark plenty of fuel. More than 70 smoke-choked schools are shuttered, and reports are still pouring in of suffocation and breathlessness as parts of the landfill were still smoldering with toxic fumes Tuesday.

At its height, the fire’s smoke plume was so great that it could be captured by a NASA satellite.

NASA’s Earth Observatory had this to say about capturing the images:

The Operational Land Imager (OLI) on Landsat 8 captured a natural-color image (upper) of the burn scar on January 28, 2016. Smoke is visible streaming southwest into Baiganwadi, a neighborhood near the landfill. The false-color image (lower) also was acquired by OLI, but it shows the location of the fire hot spots more clearly because it includes observations from the shortwave infrared portion of the electromagnetic spectrum.

Here’s an image of the fire corrected to show its natural colors.

It looks awful, but at least in space you don’t have to breathe a nine story building’s worth of burning waste. Because of the fire, Mumbai’s pollution levels reached their highest recorded levels since officials started gathering air quality data in June 2015. On Friday, the air quality index measured at 325 (“very poor”) and by evening it was up to 341. The city’s Malad neighborhood finally topped out at 417, or “severe.”

Before you get to feeling too good about how we’d do a better job of protecting people’s lungs in America, remember in California methane gas has been silently spewing all over San Fernando for months now.