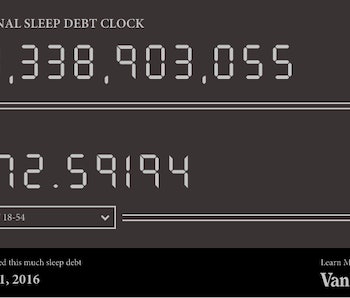 If you’re the average American adult, you don’t sleep for the recommended eight hours a night or 56 hours a week or 2,920 hours a year. Statistically speaking, you’re doing well if you get more than seven hours of shuteye before your alarm blares. And, if you pull night shifts, are a member of the military, live in Appalachia, qualify as low-income, struggle with obesity or fall into a number of other especially bleary-eyed populations, then seven hours of rest might sound luxurious.

The short of it? As a nation, we’re underslept. Big time. So much so that sleep deprivation is becoming a defining public health crisis of our time.

In an effort to up awareness of this issue, we created the Van Winkle’s Sleep Debt Clock.

As you can see, it features a running tab of sleep debt accrued every second by Americans between the ages of 5 and 85. It also also breaks down debt share by age group and for those in the military. Consider it our version of the Doomsday Clock. We hope it grabs your attention and gets you thinking about sleep.

How did it come to be? Well, we put on our Big Data hats and set out to quantify our national rest deficit, defined as the difference between the amount of sleep we should be getting and the hours we’re actually logging. After pouring through surveys on American sleep habits from government agencies and polling firms, as well as smaller population and clinical studies, we arrived at a formula and created a sleep clock. (You can see the formula, sources and methodology here.)

And, do your part to slow down the clock: Get some sleep.