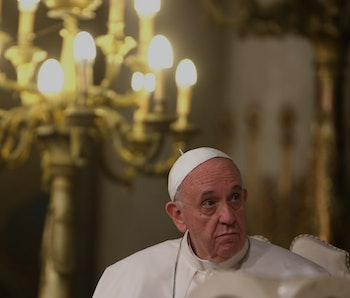 The Zika virus has even the world’s best epidemiologists stumped. Unlike the recent Ebola outbreak, which killed more than 11,000 people, the most devastating effects of Zika aren’t on the people infected but on those yet to be born: Infected mothers are giving birth to babies with microcephaly — abnormally, dangerously small heads — prompting governments to call for a ban on pregnancies. Access to birth control and abortion services, of course, would make rolling out this contingency plan a lot more effective, but it just so happens that Zika has taken root in Latin America, the New World H.Q. of the Catholic Church.

The Vatican has long been birth control’s most notoriously obstinate foe, but there’s reason to hope it might be less of an obstacle this time around: Pope Francis has actually sided with reason over doctrine in matters of saving the world. Now would be a pretty good time for him to continue his radical revamp of Catholic attitudes.

He recently gave his blessing to Spanish researchers attempting to grow human organs inside pigs, ostensibly on the grounds that it could someday save the lives of millions of people on donor waiting lists. And while he hasn’t made any amendments to the Vatican’s official policy on birth control, he’s made his softer stance publicly known, openly criticizing the Church for valuing dogma over love on issues such as abortion, gay marriage, and, yes, contraception.

Francis has shown a willingness to negotiate the importance of Church doctrine when the alternatives allow him to support the pillars of his papal platform: embracing the helpless, the disenfranchised, and the poor. It doesn’t take divine logic to see that the victims of the Zika virus — both mothers-to-be and their unborn babies — are all of those things.

The correlation between Zika infection and microcephaly incidence has yet to be confirmed scientifically, but with more than 3,000 babies born with the defect since the beginning of the outbreak, the World Health Organization has officially declared it an “extraordinary event.” That the exact effects of microcephaly on newborns haven’t been fully characterized makes the condition even more painfully vague. Children may be born with underdeveloped brains or even brain damage, and though it is not always fatal, what use is that statistic to a soon-to-be mother?

For women in countries like El Salvador, Nicaragua, Chile, and the Dominican Republic, where abortion is banned in even the most extreme cases, the international call to put a hold on pregnancies until the Zika virus blows over has been a cruel slap in the face. But, seriously: What are these governments thinking? That women will casually be able to put off having a baby because it’s so easy to access contraception and inure themselves against sexual violence in the first place? That they could do anything about their pregnancies even if they were already infected?

As Carmen Barroso, regional director of International Planned Parenthood Federation in the Western Hemisphere told Mother Jones, the strategy is “foolish, highly unrealistic, and insensitive to women.” It is, indeed, all of those things. But then again, what more can the governments do? Colombia, Ecuador, El Salvador, and Jamaica are desperate enough to put their birth rates on hold for two years. The issue is not really theirs to solve.

The Vatican, of course, knows it has the next move. Yet, to date, it hasn’t taken an official stance on delaying pregnancies. As the New York Times reported from El Salvador, local bishops have, so far, hesitated to comment on the implications of the epidemic. At most, the country’s auxiliary bishop has predicted that “the church is going to take this very seriously.”

Which brings us back to Pope Francis, who is the best-equipped person on this Zika-infected Earth to prevent the epidemic’s most devastating effects on future generations. As fears about the outbreak reach new peaks — today, the World Health Organization officially declared the microcephaly-infection link a “public health emergency of international concern” — pressure on the Pope to loosen the official church stance on contraception and birth control continues to build. There’s no doubt that he’ll say something — as history’s first Latin American Pope, he’s got even more of an obligation to speak up — but whether the lives of potentially millions of unborn children are enough to further displace his attachment to dogma remains a hope, not a certainty.

“It is not necessary to talk about these issues all the time,” he said in a public interview last year, addressing the Vatican’s take on contraception and abortion. “The dogmatic and moral teachings of the church are not all equivalent.” Francis has made it clear that he’s all about weighing good versus the greater good; everyday evil versus unforgivable sins. There is a right time to debate issues of birth control, but this is most certainly not it. In the case of the Zika epidemic, the most immoral course of action would be not taking one at all.