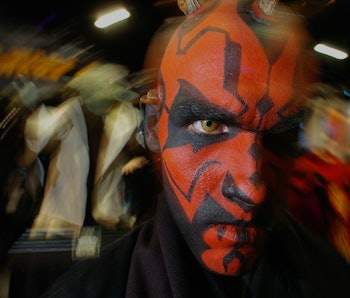 It’s a sad reality that all Star Wars fans must face. Despite Roger Ebert calling The Phantom Menace “an astonishing achievement in imaginative filmmaking,” or A.O. Scott’s New York Times review saying Revenge of the Sith is equal to The Empire Strikes Back as “the richest and most challenging movie in the cycle,” the inevitable truth is that the Star Wars prequels are just plain terrible. You won’t have to let that sink in, because you’ve had more than a decade to come to terms with their failure, and no cockamamie fan theory explaining why they’re actually better than the original trilogy can change how deplorable they really are. Besmirching the name of the prequels isn’t a dig on the genius of George Lucas; without him we wouldn’t be here arguing right now. But any faint praise or technical excuse to compliment The Phantom Menace, Attack of the Clones, or Revenge of the Sith is straight-up Star Wars fan denial.

But something can be done about this. Disney can just remake them.

Yes, that would be incredibly drastic. Why not just keep chugging forward through the ever-expanding Star Wars universe, and leave the ’90s to choke on Jar-Jar Binks? In part, because the prequels were truly that disruptive for the rest of the franchise. Think otherwise? Go ahead and re-watch them. We’ll be here when you get back. After nearly eight hours of excruciating CGI, flaccid acting, styrofoam dialogue, near-total narrative ineptitude, and a spotless plastic aesthetic that betrays the grimy and lived-in universe that defined Star Wars, you’ll agree. Something should be done. Shy of pulling a George Lucas and scrubbing the history of Star Wars, we should just call for a mulligan.

The prequels do pay clumsy homage to the first three films, but the gulf between the trilogies is wider even than the 16 years that separated them. If anything, the prequels are so bad that they make the original trilogy look even better. But there’s no reason, with essentially endless Star Wars movies on tap, that we should be stuck with them as canon for the next century. Disney is admittedly going to continue to make Star Wars movies until audiences stop showing up — which will probably be never. “There are five Star Wars films — four more with Episode VII: The Force Awakens — that are in varying stages of development and production,” Disney chairman Bob Iger told BBC’s Newsbeat. “There will be more after that. I don’t know how many; I don’t know how often.”

It’s this relentless plan of attack that caused Wired to pronounce Star Wars the “forever franchise.”�������� Iger says there are five movies planned at the moment, but what about after that? Bring on prequels remakes, that’s what.

It’s not entirely out of the question. 20th Century Fox owns the the first six films, and outside of the original movie, those rights will eventually revert back to Disney. That means at some point everything in the prequel trilogy will land back in Lucasfilm’s lap.

And lest you forget: There’s no better shop in history at recasting fairy tales than the House of Mouse. No longer content to update the Brothers Grimm, Disney has been steering Marvel into its latest incarnation as one of the great cultural touchstones of the 21st century. Rewriting Star Wars history is simply part of the Lucasfilm pact — out with the old, in with whatever will sell. In preparation for The Force Awakens and what followed, Disney and new Lucasfilm president Kathleen Kennedy promptly — and mercifully — kicked the unwieldy Expanded Universe of alternate stories out the “official” Star Wars canon. So it’s obvious they’re not precious with discarding what they feel are vestigial components of the mythology.

And it’s not as if Lucas himself didn’t feel it was sacrosanct to try and improve on what came before. The dude endlessly tinkered with the original trilogy and capped it off by releasing the CGI-rific Star Wars: Special Editions in 1997.

But Lucas has been critical of what Disney’s Lucasfilm has done to his babies, saying The Force Awakens basically ripped off what he did starting in 1977. “They wanted to do a retro movie,” he said in an interview. “I don’t like that. Every movie, I worked very hard to make them different, make them completely different with different planets, different spaceships, to make it new.” But George, what were the Star Wars movies if not retro?

In a Hollywood mad with reboots and remakes aplenty, which is the same franchise-building tendency that brought about Disney’s $4 billion plans to jumpstart Star Wars again in the first place — there’s still ample time to re-do the prequels. Other franchises, like the Harry Potter movies, have maneuvered for ways to squeeze money out of their waning installments by splitting single stories into two movies. There’s no shame in that, so why not just own up to it and have another go at Darth Vader’s beginnings? Just roll it into one fat circus of a ride, call it Vader: Origins, make it 196 minutes long, and break every IMAX screen on the planet in the summer of 2025. Then, on the morning of the premiere, drop the news that the prequels would no longer be considered canon from there on out.

Tell me you wouldn’t buy two tickets for the first 14 showings of that.

“The fans are going to love it,” Lucas told Vulture about his reaction to The Force Awakens. “It’s very much the kind of movie they’ve been looking for.” Instead of making a passive aggressive dig on Star Wars fans critical of the prequels, maybe Lucas should have embraced the truth to what he was saying. After the prequels, the fans were looking for something better: a movie more enamored of samurais and cowboys and adventure than with computer graphics and stilted drawing-room banter. Now that thing are better, the best route is to rectify the three recent lackluster excuses for Star Wars movies. The fans would love it.