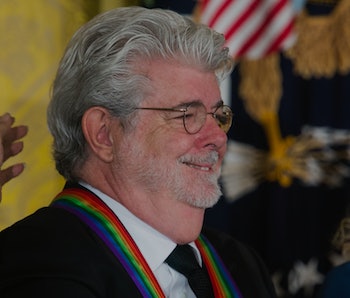 George Lucas, the Star Wars mastermind, was feted on Sunday in Washington, D.C. at the annual Kennedy Center Center Honors for his achievements in arts and culture. While we like his other contributions to the movies like American Graffitti and helping usher in Indiana Jones, he mostly got that shiny gold medal for creating the cultural behemoth called Star Wars. But, in 2012 he sold his baby away for a new slew of filmmakers to continue the story in the galaxy far, far away, starting with this year’s The Force Awakens. Fans were waiting with bated breath about Lucas’ own opinion of the first Star Wars movie out of his control, and at the Honors this weekend he finally let everyone know what he thought.

Last week The Hollywood Reporter quoted new Lucasfilm head Kathleen Kennedy about what Lucas thought of the new movie, saying “he really liked it,” and mentioned that he’ll attend the new movie’s premiere. But the response from the former dude-in-charge was less a deep affection for it and more a deflecting “get off my lawn” old man shrug.

“I think the fans are going to love it,” he told Vulture. “It’s very much the kind of movie they’ve been looking for.”

Yeah, but, George, what did you think about it? It’s a fascinating response considering Lucas’ aversion to the backlash to his notorious prequels. A recent Washington Post profile mentioned he’s avoided the internet altogether for 15 years, most likely to dodge things like this very post.

So can that response about the fans be read as a passive-aggressive dig? Does this really mean Lucas didn’t like it? Probably not. But knowing Lucas it’s telling. In that same Washington Post profile he likened the sale of the Lucasfilm empire to a divorce. “I gotta go to the wedding,” he said to WaPo. “I’m going to have to take a very deep breath and be a good person and sit through it and just enjoy the moment, because it is what it is and it’s a conscious decision that I made.”

It must be tough for Lucas to see his kid again, all grown up and doing well without him.