Good news, everyone, there’s some real music-related Kanye West news to get jazzed about. It’s not an album name or a mudslinging Twitter spat. West will return to Saturday Night Live on February 13 with host Melissa McCarthy. It’s the sixth time Kanye has performed on the show, and nearly every appearance has been visually iconic and controversial. Each of his SNL performances has offered a complement to the recorded version of the song that’s so memorable, it’s often hard to detach the two.

His last appearance was just under a year ago, on the SNL 40 special, where West performed then-new songs “Only One” and “Wolves,” as well as the classic College Dropout single “Jesus Walks,” with a minimal, eerie staging. Every major public Kanye appearance these days is a raw, theatrical, and intimate experience, so this will be one to tune in for. Whatever else happens with the WAVES rollout — whether or not the album is a disappointment or not — this SNL performance is guaranteed to not be boring. Chances are — as it did, say, with “Black Skinhead” and “New Slaves” in 2013 — it’ll make you like the songs that much more.

Here are some choice clips of Kanye’s past SNL appearances. 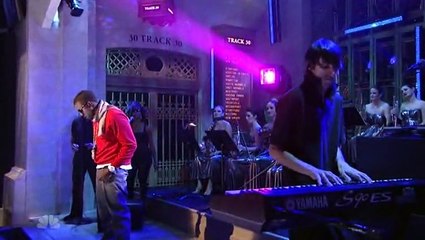 More like this
Culture
Sep. 23, 2022
You need to watch the best legal thriller of the century before it leaves HBO Max next week
By David Grossman
Entertainment
10 hours ago
Vesper is a breathtaking sci-fi warning about our real-life future
By Eric Francisco
Entertainment
11 hours ago
Rick and Morty’s scariest episode ever copies the best sci-fi of the year
By Corey Plante
Share: