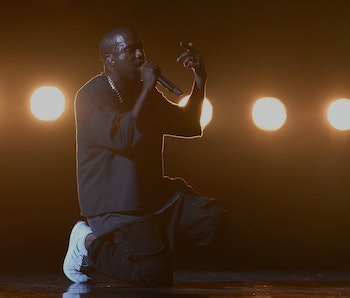 Update: The album is now called ‘Waves.’ Of course he changed it.

There are many forums — most notably KanyeToThe and the Hip Hop Heads Reddit — that are either designed around — or boast a rich history of — Kanye worship and paranoiac theorizing. Every tidbit unveiled about the rapper’s movements, or anything that even vaguely resembles a rumor, sets off tsunami waves ( of new threads and speculation on these sites.

Now that hip-hop’s crown iconoclast has announced his plans to unveil his new album, Swish Waves on February 11th, the message-boarders are rabid. It’s been two-and-a-half years, almost, since the advent of West’s last album, Yeezus, and it is — for many commenters — almost too much to handle, especially since the rapper tweeted out a handwritten copy of the finalized tracklist.

Additionally, the rollout celebration has been an endless source of debate. The element — just officially announced — appears to be a live concert or listening party, coupled with a fashion show of some sort. It’s slated to take place at New York’s Madison Square Garden, with a simultaneously screening in select theaters. The fashion element — the release of Yeezy Season 3 — was first discovered by TeamKanyeDaily zooming in on this photograph that Kanye tweeted.

The range of posts one finds about Kanye on these sites get as deep as elaborate theories about unheard songs from the album based on unrelated tweets between producers, and Swish being unveiled to some commenters in their dreams

Here are some of the most prominent and outlandish theories that have been cropping up about the new album.

It is the first of a two-album cycle

After this album’s long gestation and all of the seemingly abandoned sessions (Is any of the Paul McCartney material from last year anywhere to be found on this album?), many fans have found it hard to believe that Swish Waves could just be one 10-track album. Some have just speculated that Swish Waves could be a Part 1 and Part 2 type situation, with the second one revealed after the first has come out.

One user has extrapolated a complex theory, synthesizing ideas about distribution trends and the rumormill about Kanye’s business partnerships and the two alternate titles for the new album that have been passed around over the years. Here’s the user:

“Around that time Kanye will announce part II: So Help Me God, which will be released in October of this year

“The two will be released digitally, exclusively through Apple Music (announcing Kanye’s partnership with Apple) and eventually the two discs will be released as one physical entitled Good Ass Job (we know Kanye has been saving this title for what he believes is his magnum opus)

“There’s a lot of evidence supporting these claims

“Is it guaranteed? No

“But one thing I truly believe is certain about this era is that it’s bigger than Swish, something big is coming (and not just Yeezy Season 3)

’Yestradamus with the “Bigger than Swish” argument, going full force — no place better than the long-running board devoted to Kanye stanning on the internet.

This tracklist isn’t final, by any stretch of the imagination

One user points out that My Beautiful Dark Twisted Fantasy’s apparent tracklist was released, handwritten on a notepad, and then drastically changed for the release. Untill the pre-order link for the album goes up on iTunes, many users will not be satisfied with ’Ye’s nearly illegible scrawlings — which causes some speculation on KanyeToThe, as well.

All the songs we’ve heard will change drastically

Many commenters believe that Kanye is likely to alter pre-released album tracks in their final form on the album. There is some argument because the recent “Real Friends” and “No More Parties in L.A.” went up as SoundCloud tracks, and — some believe — don’t sound great, giving them an unofficial or possibly alternative-take air. But a long, nearly untraceable series of rumors (this often happens on KTT) has caused much speculation that Chicago rapper Vic Mensa’s feature on “Wolves” — as heard originally in his February Yeezy Season 1 fashion show — will be altered on the Swish Waves version. Fans have devoted whole threads to wishful thinking.

Others have pulled for Ja Rule and Chris Martin. There’s a lot of speculation about Thug appearing on the album, thanks to some offhand, typically bizarre comments from the Atlanta rapper and now-deleted tweets from his collaborator Be El Be.

The length of the album is about an hour

With the songs we know, it takes some creative math (maybe a 14-minute-plus entry) to get it right. But that hasn’t stopped some from trying at an exact list of durations.

Kylie Jenner is the executive producer of Swish Waves

I’m hoping for a hidden track with Kylie rapping, but message-board-heads have been so bold to suggest that the “KYLIE WAS HERE” notation means the Jenner sister is taking a more pivotal role than expected. After all — as Khloé Kardashian said this month — the whole Kardashian family is often with ’Ye in the studio, even offering him input. So could the Swish Waves tracklist be all Kylie���������������s idea?

If you want to get even weirder than these ideas, maybe you should check out the evidence that David Bowie’s music presages the story of Kanye’s take over as the world’s reigning rock star. Or just keep refreshing KanyeToThe for more ominous predictions. The latest as of this writing? “Something will happen tonight.” Watch out, everyone.

Is Kanye going to die? Is this his final statement??? Only message boards experts have the answers, Sway.