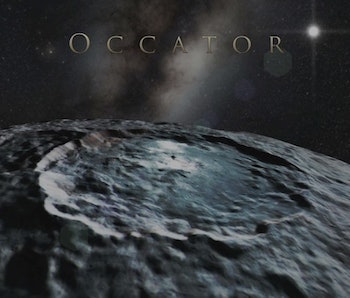 Apparently when NASA isn’t finding water on Mars or developing plans to send robotic space guns out to nearby asteroids, it’s working on some pretty dope videos. The agency’s latest is an animated short resealed by the Jet Propulsion Laboratory that depicts the Dawn space probe’s flyby over the dwarf planet Ceres.

Launched in 2007, last March Dawn became the first spacecraft to visit a dwarf planet; it arrived at Ceres just a few months before New Horizons made it to Pluto. It’s currently in orbit of Ceres, 257 million miles from Earth, after having completed a 14-month survey of the minor planet Vesta in 2012.

The new animation uses images Dawn has snapped up during the high-altitude phase (900 miles above the surface) of its orbit. We get to see Ceres in enhanced color to emphasize the subtle geological differences on the surface, with shades of blue illustrating areas believed to contain younger earth and structures like flows, pits, and cracks.

In addition, the movie runs through incredibly detailed scans of the planet’s most prominent craters such as Yalode, Occator, and Ahuna Mons.

Dawn is currently on the last leg of its stay at Ceres, maintaining a low mapping orbit at about 240 miles above the surface. We can expect even better images to come out of that collection.