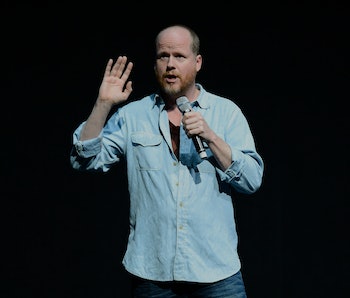 Joss Whedon, director of both Avengers movies and the creator of some of the most beloved genre shows ever, has a history of writing strong female characters. He was also the man that helped shepherd the Marvel Cinematic Universe into the interconnected box office behemoth it is today.

But following his duties on 2015’s Age of Ultron, Whedon and Marvel made an amicable split. “This was the hardest work I’ve ever done, and at some point, when it’s that hard, you just feel like you’ve lost,” he told Slate last year. It doesn’t look like Whedon wants to deal with Marvel’s micromanaging of multi-billion dollar movies anymore, and yet he’s got the perfect opportunity right in front of him in Marvel’s Phase Three slate. It makes perfect sense: Joss Whedon should direct Captain Marvel.

“But wait!” you exclaim. “A female director is the right person to help guide Marvel’s first solo-billed superhero to the big-screen!” And you’d be right. Like DC’s adaptation of Wonder Woman, directed by Patty Jenkins, a female director is probably the person best suited to help make Marvel’s series even more diverse. It’s only right. A dude directing Captain Marvel is almost as absurd and misguided as having a white guy direct Black Panther.

But that would be true for almost everyone except Whedon.

Whether it’s the protagonists from Buffy the Vampire Slayer or Dollhouse, or the fact that he was the guy who managed to actually make Black Widow into an interesting comic book hero on-screen, Whedon seems almost preternaturally able to create and maintain strong female characters. It’s mostly because he treats them as normal dynamic human beings with feelings and character arcs, but somehow other screenwriters haven’t figured that out yet.

With shows like Buffy, Whedon has also pulled off the other inexplicably difficult task of creating an entire world around his protagonist. He created a unique narrative framework that helped perpetuate its own mythology. It did its own thing, steadily built fans, and became one of the best feminist TV shows ever.

This kind of talent is the main reason that got him the Avengers job in the first place, and the kind of geek-centric know-how that made him, in his words, Marvel’s “consigliere.” But that same steadfast idealism and perspective are what increased the tension that ultimately forced Whedon to step away from his unofficial role in the MCU braintrust. Marvel wanted to do it their own way, and not the Whedon way.

“I made a completely clean break — not because we had a falling out” he told Oxford University’s Oxford Union at a recent Q&A. “It was very important for my own self to go ‘we can still be friends,’ but …” Whedon trailing off says it all.

Despite the fact that movies like Iron Man 3 and Thor: The Dark World made oodles and oodles of money, they were some of the most boring and safe entries in the entire MCU. But now that they have their boatloads of cash, Marvel has begun taking some chances. They’re getting mystical with Doctor Strange, giving the first African American superhero his own entry with Black Panther, and now they’re letting Captain Marvel headline her own movie. If they’re not being such sticklers anymore, maybe it’s possible to coax Whedon back with the freedom to make Captain Marvel into its own awesome thing.

And it isn’t out of the question. When asked about the prospect of directing Captain Marvel, Whedon told Buzzfeed:

“I would never rule anything out, because I like working [at Marvel]. By the same token, the biggest thing for me is that I need to do something that I create myself. It’s been way too long since I created a universe. … Captain Marvel I don’t know as well. There have been a few [versions] of her. I have the first issue of Ms. Marvel, back when she was that, and had the Farrah hair. My only issue with her is that she always felt sort of on top. She was very driven. A winner. I always like to dig into the soil of things to find my heroes, if I can.”

Before you get your hopes up on this still very vague comment, remember, it was made before his split from Marvel.

But Whedon is nothing if not a creative powerhouse, and you know the idea is still swirling around his head. This is the guy that quite righteously answered the rhetorical question, “Why do you write these strong female characters?” with the perfectly put “Because you’re still asking me that question.” He isn’t mansplaining how to make a dynamic leading female character, he’s simply letting whoever she is speak for herself. That’s what Captain Marvel and female Marvel fans deserve.

If a female director passes on the job, and Whedon is interested, he’s the perfect person for the job.