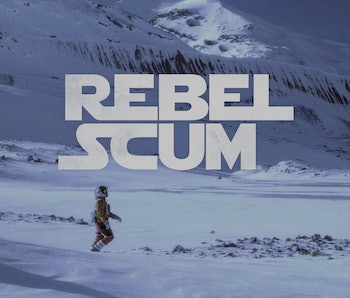 Blood Brother Cinema Co. is a production company comprised, naturally, of three brothers. The Nguyen Brothers have been making films together since they were little kids, and after decades of working side-by-side, they’re starting to produce work on a much grander scale.

This brings us to Rebel Scum, a Star Wars fan film that is better than it has any right to be. Filmed over a period of two months at the Columbia Icefields in Alberta, Canada on the Athabasca Glacier, the film uses no CGI and only employs the original trilogy’s use of stop-motion animation. Due the nature of the hostile environment, a custom thermal rig had to be built to keep the cameras from freezing, but that level of psychotic dedication yields something that looks like this:

After being blown away by the film, I reached out to Timothy Nguyen to walk me through how a lifetime of brotherhood sets you up to be the kind of filmmakers from whom we’ll soon be seeing Marvel-level projects.

Tim, tell me what got you into filmmaking?

My brothers and I were making films from a young age. We had an adventurous life growing up; our family travelled quite a lot globally working with Vietnamese refugees from the Vietnam War. Often we just had each other to keep entertained so our imaginations ran wild. We made films in the jungle as a past-time with our friends and imitated our favorite films to the best we could. Living in many crazy places gave us a unique perspective of people and their stories.

I was always told to master the “one scene film” where your entire film takes place in one location. For me that maximizes our production value and gives us an opportunity to make a wide variety of films. We like using shock value and try to capture the realism of a lived in world. I particularly am drawn to stories of characters who go from zero to hero by enduring a brutal trial — essentially putting our characters to the limit. I love putting characters in crazy environments to draw out the worst or the best in them. War Is Hell, in some ways, is my homage piece to the Vietnam War’s impact on my family and the many lives that it affected.

What led you to the world of fan films? Is there anything there that’s frightening in knowing that all of your work could be taken down in a single cease and desist from the Disney corporation?

Our first productions were heavily influenced by our favorite films growing up. We would see a movie we loved and try to replicate it as best we could; so, in that sense, we were making fan films from the start. It’s like baking a cake without knowing the recipe. Lucasfilm has been so gracious to the fan community and hosting venues like the Star Wars Fan Film Awards. If it were not for the huge fan contributions, Star Wars would not be what it is today. We really appreciate Lucasfilm & Disney’s openness for fan content in that regard. I was more nervous about the fan reception to our film.

One of the first films I saw was Star Wars, so it sparked that seed for narrative filmmaking in me. Often we would sneak to our friend’s house to watch it over and over again. The trench run from A New Hope was my favorite scene of all time; it blew my mind how amazing the effects were for that time period.

Where did the Rebel Scum story idea come from?

Walk me through the process of making this film. I’m fascinated by your dedication to stop motion and other non-CGI techniques.

I was always mystified by the older techniques used in the Empire Strikes Back, so I knew that would be the direction to take. Stop-motion animation creates an incredible mythic feeling when you watch it; I feel it really sells the fantasy aspect. In addition, it was the cheapest way to go.

You shot in ridiculous climate situations. How big was the crew and how did you all survive?

Our crew was incredible tiny — about eight in total. The location was absolutely insane to film on, so I knew we needed a small, efficient crew to hustle out to set. Mentally, everyone was prepared for filming in the harsh environment, so that really helps. Lots of hand-warmers and thermal layers for hours outdoors.

Our actress was actually frozen to the core in our film; she sat in a pool of ice slush for hours as it crusted over her pants and froze them solid. All of her shots are her natural reactions to the bitter cold. Not once did she complain; honestly, a real trooper. As well my brother Paul (screenwriter and producer of Rebel Scum) conveniently broke both his hands during a longboarding accident during the course of filming, so half of the time he was out with us in two arm casts.

Post-production took close to a year on this film. Myself and our VFX [visual effects] supervisor Josiah spent many months on the animations; mainly working on weekends and every day off from work.

Where does the film go from here? Is there a dream end-game here, like getting one of the unknown multitude of spin-off films?

It would honestly be fantastic to direct one of the Star Wars spinoff films or be involved in some way. Ideally, we wanted Rebel Scum to showcase our work and what we could be capable of. Producing more of our own original films in a feature format is part of the big picture dream for us.

Have you heard from anyone associated with the franchise?

It would be humbling to get that phone call! Lots of incredible people have reached out to us so it’s definitely a good step in that direction. I would even just be happy knowing that someone from the franchise has seen our film and it put a smile on their face.

What’s the next project for your team and how can people support you?

We have an original science-fiction short film currently in post-production and several projects in early development. I am just blown away by the incredible support from people and their love for Rebel Scum. My hope is that together we can make more films with pioneering visuals and fantastic storytelling.