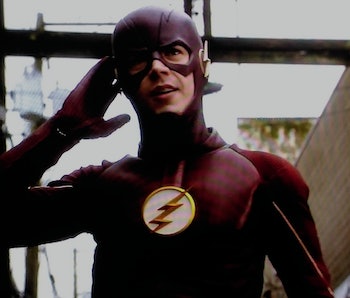 The Flash is the story of Barry Allen, a superhero who fights for what’s right, works with his friends, and reveals his secret identity to at least one person a week. In fact, almost every character on the show knows Barry is Flash, except for girlfriend Patty Spivot. Hmmm …

The Reverse Flash is back!

However, this incarnation of RF does not resemble Harry Wells — if you remember, the R-Flash had killed the original Earth-1 Harry and adopted his body and life — around the same time he killed Barry’s mother and left Barry’s dad on the hook for the crime. He’s now appearing as his true self, Eobard Thawne.

Meanwhile, it turns out Patty Spivot hasn’t left town yet — her acceptance to CSI school is set, but she’s still a working cop with the CCPD. Barry and Patty are now in the broken-up zone, and she still remains the only major character that doesn’t know Barry = Flash.

Harry gets Cisco to use his “vibe” powers. Cisco sees … the Reverse Flash. They now know he’s coming.

Flash and RF face off at Mercury Labs — with one punch, RF lays out Barry, and by the time Flash snaps out of the zonk, Reverse Flash is gone with a prisoner: Mercury Labs scientist Tina McGee.

He tells McGee to use tachyon particles to enhance his Speed Force. She says she doesn’t know how. He makes it clear he’ll vibrate his hand through her face if she doesn’t.

Harry invents goggles that let Cisco vibe at length, with increased focus. He ends up seeing that McGee indeed got those tachyons working for the Reverse Flash, who has checked out of the timeline, killing McGee before leaving … but did this happen? Not yet. Turns out Cisco was seeing the future. This means, maybe Flash and his team can still save McGee and stop the Reverse Flash.

Oh yeah, remember how Patty is the only person who Barry hasn’t told that he’s the Flash? Well, she tells Joe West, “I figured it out…Barry is The Flash.” Oof.

As for McGee, Flash does manage to save her, as well as capture Reverse Flash (with the aid of some super-speed gut punches.)

Patty begs Barry, “Tell me you’re The Flash.” He insists he’s not. She cries and runs out. Somehow, all of the STAR Labs team, Joe West, Iris West, Barry’s last girlfriend, Captain Cold, Arrow and his entire staff, the Legends of Tomorrow, and Barry’s dad get to know that Barry is The Flash—but Patty can’t know the truth.

Remember those vibe glasses Harry made for Cisco? Looks like there’s a side effect: over-electrical brain stimulation, leaving Cisco in a state of seizure and heavy flow nosebleeding. His deep vibing has connected him to all the changes that have happened to the timeline, and it’s ripping Cisco right out of existence. The only cure? Send Reverse Flash back to the future to heal the timeline.

Barry, extremely miffed at this turn of events, agrees to get Thawne back to his own time, knowing the RF will eventually kill the original Harry, Barry’s mom, wrongly get Barry’s dad jailed, fight Flash a bunch of times, and basically ensure misery for Barry. But Cisco? Once he and RF do some special time-travel racing, and Thawne is sent back to the future, he begins to recover.

Patty and The Flash meet one last time, as she leaves on a train. Barry just kind of lets her semi-see that he is actually The Flash — without saying so. Nonetheless, Barry has once again made sure his identity is the worst-kept secret in the superhero biz.

The Flash returns next week on Tuesday, 8 p.m. on the CW.