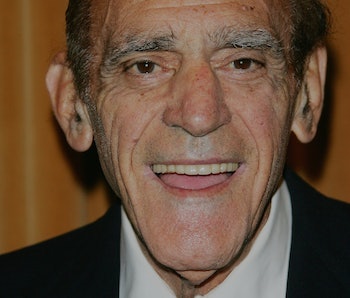 First created in May 2001, one-off website AbeVigoda.com made a timely update on Tuesday and marked the passing of its namesake, the “sunken-eyed character actor” Abe Vigoda, who died Tuesday at age 94. The domain expires in May 2016, and there’s no telling as of yet if the registrars will renew it.

In 1982 and in 1987, erroneous reports in the media listed Vigoda as dead, making him the subject of running jokes, notably on the Late Show with David Letterman:

More like this
Innovation
Jan. 19, 2023
A robot choreographer reveals why M3GAN — and all robots — should dance
By Molly Glick
Culture
Feb. 1, 2023
Long Before The Fabelmans, Spielberg’s Catch Me if You Can was Being Misinterpreted as Sentimental
By Eric Francisco
Culture
2 hours ago
Buck Rogers in the 25th Century’s Most Baffling Change Also Gave Us Its Best Character
By Ryan Britt
LEARN SOMETHING NEW EVERY DAY.
Share: