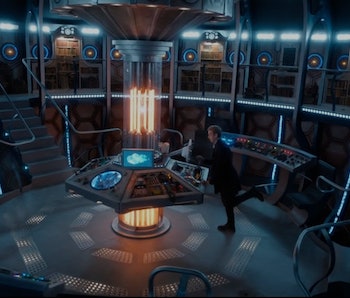 Now that it’s confirmed Season 10 of Doctor Who will be Steven Moffat’s last, rumors are already swirling that star Peter Capaldi will be following suit. Capaldi’s departure makes a ton of sense: It gives new show-runner Chris Chibnall a clean slate and lets Moffat drop one final regeneration sequence. And while Capaldi has been amazing, three seasons seems like a pretty good run for any actor playing the titular role. While the future of the show looks bright in the hands of Broadchurch creator Chibnall, obviously, the next big question Whovians are asking is: Who will Chibnall hire on to play the 13th Doctor?

History shows the next Doctor will probably be someone relatively unknown outside of British TV or stage; it’s weird to think about, but Peter Capaldi was probably the best-known name to be tapped to play the TARDIS-traveling Timelord for a full season. Yet increasingly, big (or formerly big) movie stars are heading to the small screen, which means the Doctor’s next face could indeed be a familiar one. Here is a wish list of actors and actresses we’d love to see in the role.

It’s no secret that the Hayley Atwell wants the gig, and there is a deep base of Whovians who want her in the role. Plus, it looks like she’ll have some time on her hands. It’s hard (though not impossible) to imagine that Agent Carter will be around in 2017, so she should be free to commit to a couple of years as everyone’s favorite Gallifreyan time-traveler.

Like Atwell, Ayoade has made no secret that he would live a turn in the TARDIS, and if the show opts to go back to a younger, male Doctor post-Capaldi, we can’t think of anyone better than the former star of The IT Crowd. Plus, he’s right in that prime area of stardom. Like Capaldi, he’s a known name with a fan base, but not in that mega-star territory where taking the role would be a step down.

Can you think of a BBC series you’ve seen in the past 10 years that didn’t feature Colman in one role or another? One of the more versatile performers on the list, she’s equally at home in drama or comedy. Also, she is no stranger to new showrunner Chibnall, having spent two seasons as the lead role opposite David Tennant in Broadchurch.

The Harry Potter alum’s name came up frequently in the discussions of who was going to replace Matt Smith back in 2013. By the time Season 11 arrives, the baby-faced Grint (who’s now 27) would actually be older than Smith (27) when he took the role, so age isn’t necessarily an issue. Plus, it’s no secret that Who ratings have been down, so don’t be surprised if Chibnall and Co. try and tap into the vast Harry Potter fan base to attract new viewers.

We can see Robert Carlyle potentially bringing a bit of a Sylvester McCoy vibe back to the role, but that’s not a bad thing. Ultimately, we love Robert to bits, and we just want him to find something — anything — that isn’t Once Upon a Time.

James is one of those actors who is amazing in everything he does, but seems to be perennially stuck in supporting roles. Doctor Who would finally make him a household name, and given his versatility, he could do amazing things with the role.

Like James, she has made a career of doing exceptional work in supporting roles, and much like Colman, the Broadchurch Season 2 alumna has a good working relationship with Chibnall. What the one-time Academy Award nominee may lack in popularity, she more than makes up for in acting chops and experience. Jean-Baptiste obviously looks different from the previous Doctors, but she could certainly take Doctor Who’s game to a whole new level.

After the Pirates of the Carribean movies, the former Coupling star and current Mr. Michelle Gomez’s movie career seems to have fizzled a bit. Davenport does good work, and getting the nod as the next Doctor gives the BBC a familiar face and known quantity for the role. It could also help rejuvenate Davenport’s career.

Let Us Have Our Dreams, Guys

If there were any chance of Elba being the Doctor, it probably would have happened after Matt Smith’s departure. The internet went crazy at the prospects of the Luther star taking the part, yet all signs point to Elba being the “mysterious black actor” who turned down the role in 2013. Now that his star his risen even further, we don’t see Elba wielding the sonic screwdriver anytime soon.

Nighy has already turned down the role once. He doesn’t strike us as a fellow who is prone to changing his mind on such matters, but we’ll bet you a dollar the BBC comes knocking on his door anyway after Capaldi’s departure is official.

The world is ready for a Swedish Doctor Who. When you think about it, doesn’t Skarsgård play a version of the Doctor in just about every role he takes? He’s probably a bit too high-profile, but this season of River (which is one of the best shows on Netflix right now), shows he is willing to do TV when it suits him.

Yes, yes, we know. There is mathematically a 0.0000001 percent chance of this ever happening, but we can dream, can’t we? Swinton can play any damn role she wants, and while we can’t imagine her spending a year or two doing TV, she would be perfect as the 13th Doctor.