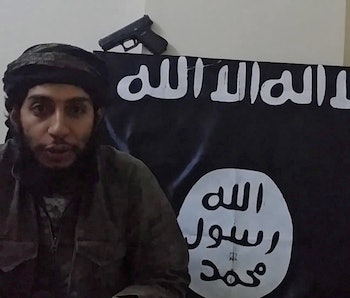 NSA whistleblower Edward Snowden called out ISIS on Sunday for posting a video containing what he says is a “confirmed fake” encryption email.

The 17-minute video allegedly shows the Paris attackers, who killed 130 people in November, filmed in what appears to be a desert and claiming that the United Kingdom might be the group’s next target. “The following are the final messages of the nine lions of the khilafah who were mobilized from their dens to bring an entire country — France — to her knees,” the video reads.

The footage ends with a scrolling message purportedly coded with the PGP encryption program. ISIS commonly uses cheap encryption technologies. Encrypted message app Telegram booted ISIS from its channels after the group was discovered using them in 2015.

Annotating a still from the message, Snowden wrote: “I hope you built a time machine to go with your ‘attack plans.’”

Snowden went on to speculate that ISIS saw an “advantage” in the West limiting security access as the images were juxtaposed with strongly anti-encryption British Prime Minister David Cameron.

If ISIS really is trying to scare the west with crypto, it would put them on the side of several influential leaders in law enforcement. Though met with little support, U.S. officials like FBI Director James Comey have called on tech companies to provide a “golden key” backdoor that would allow them to unlock encrypted communications.

California is considering an anti-encryption bill. The United Kingdom has said communications companies should decrypt encrypted messages when asked. Opponents argue that any backdoor in security is a weakness, one that could be exploited to spy on innocent civilians.

Not that ISIS needed any coded messaging in Paris. The gunman in that attack and allegedly in this new footage communicated using unencrypted text messages.