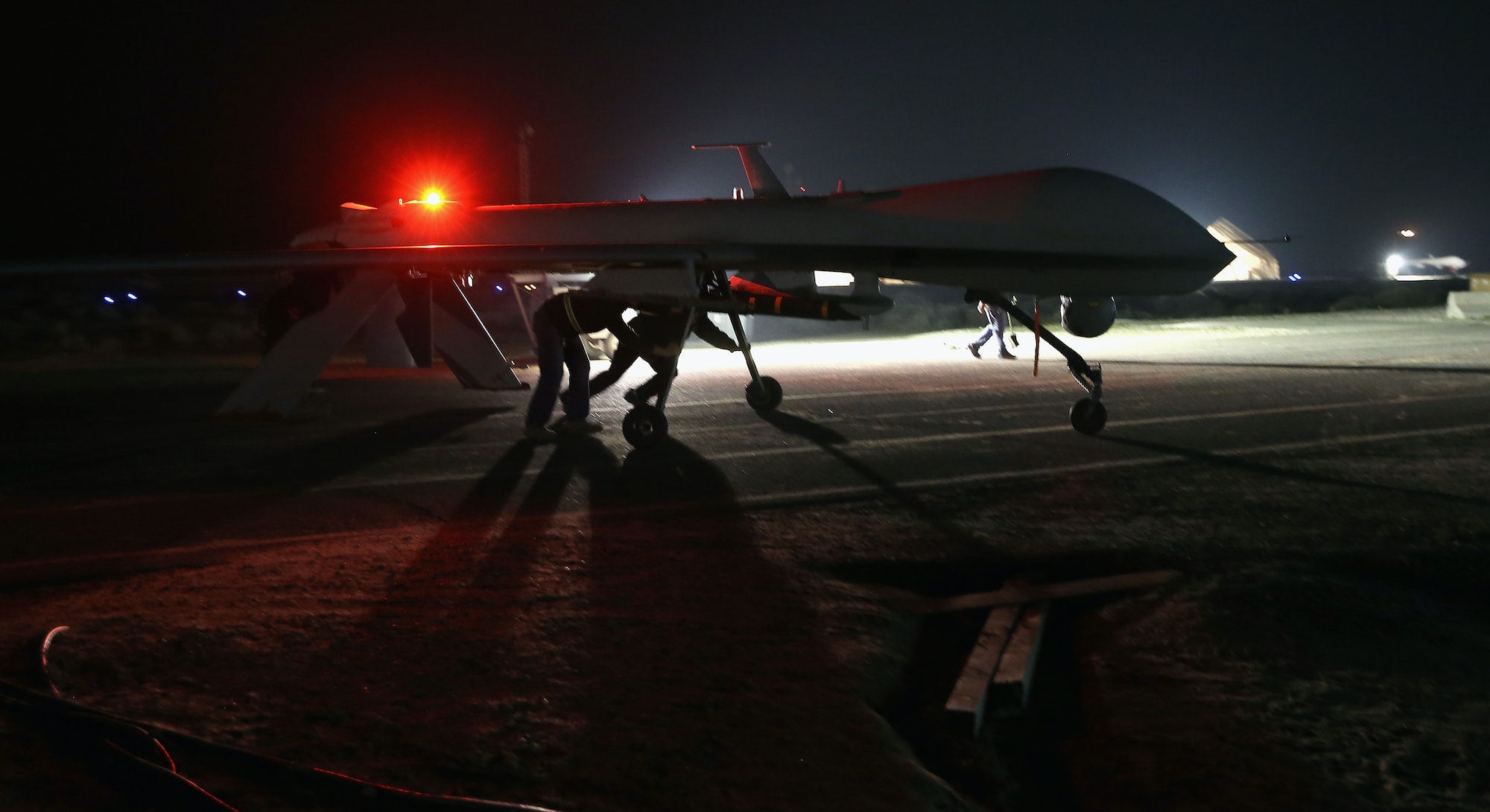 The period in U.S. history immediately after 9/11 is filled with examples of over-hyped threats that functioned to keep the country in a siege mentality. Probably the most important of these were the so-called anthrax attacks. After spores of the deadly disease were found in offices of several political and media elites, large swaths of the country began to believe that either al Qaeda or Saddam Hussein’s regime in Iraq had extensive caches of functioning chemical weapons that could infect the entire country. The spores had in fact come from a U.S. military lab.

A lesser remembered, entirely non-existent threat — nevertheless hyped as real — was that Iraq had a fleet of drones it would be able to fly across land and ocean to unleash attacks on U.S. soil. This was before the term “drone” had entered the general lexicon, even, to give a sense of how far into the future such a threat was looking. The assessment came from none other than the CIA, which wrote in a 2002 National Intelligence Estimate that Saddam had an unmanned aerial vehicle, “probably intended to deliver biological warfare agents.” The document went on to warn, “Baghdad’s UAVs could threaten Iraq’s neighbors, U.S. forces in the Persian Gulf, and if brought close to, or into, the United States, the U.S. Homeland.”

As Wired described it in 2013, “the bio-drone allegation reads like something out of a fever dream.” At the time, however, it was one more piece of manufactured evidence that helped make the case for the U.S. invasion of Iraq. There was no truth to any of it. Iraq’s biological weapons program had already mostly been destroyed, and the primitive drones Saddam did have were not weaponized. They posed no threat to Iraq’s neighbors or to the United States. (Some American soldiers were exposed to long-abandoned Iraqi chemical weapons over the course of the U.S. occupation, which the Pentagon long denied.)

Following last fall’s terror attacks in Paris, and set against the background of an overheated presidential campaign, Americans are terrified of a terrorist attack at levels the country hasn’t seen since 9/11. The threat that ISIS poses to people in the States is regularly exaggerated in the media, and has led to a disproportionate amount of news coverage and space in political debates. Several Republican presidential candidates have incorporated ISIS warnings into campaign ads, and both current candidate Ben Carson and former candidate Lindsay Graham referred to ISIS an “an existential threat.”

It’s against this backdrop that a new development in the international drone market takes on a real urgency: China’s increasing willingness and ability to manufacture and ship cheap drones, no questions asked. Foreign Policy outlines the broad parameters of the trend in a solid piece called “Meet China’s Killer Drones.” The article states that “Saudi Arabia, the United Arab Emirates, and Egypt have bought armed Chinese drones, as have Pakistan, Nigeria, and Iraq.” FP explains that Chinese-made drones offer two significant advantages those made in America. For one, they are much cheaper; for another, they are much easier to buy. The U.S. State Department regulates which countries are allowed to buy armed drones from U.S. companies. Last February, the Washington Post reported that President Obama was going to loosen the regulations and allow more ally countries in the Middle East to purchase American-made drones, though that change has resulted in few approved sales.

Now, to be clear, there’s absolutely no reason to think that any of these cheap drones pose real threats to people in the United States. But in a political climate and election cycle when drumming up irrational fear can goose poll numbers, it’s not unreasonable to expect we might get a new round of over-hyped fear about an enemy’s supposed drone fleet.

A newfound fear of ISIS drones can’t be far behind.

Media have already run deja vu-type stories about ISIS and biological or chemical weapons. There is evidence to suggest ISIS has used chemical weapons against Kurdish forces in Iraq, but none that the militants have the ability to hit the U.S., according to Department of Homeland Security Secretary Jeh Johnson. That hasn’t stopped outlets from running stories about the threat of an ISIS dirty bomb – and some even suggested ISIS would try to weaponize a person with ebola to infect U.S. citizens. These stories had little basis in reality, but they made for good cable news segments.

In some ways, these debates mirror the kind of war-on-drugs panics that tend to cycle every few years. Media critic Jack Shafer has written extensively about how unfounded speculation around a terrifying new drug — bath salts, K2, etc — can lead to a collective frenzy fueled by fear and assumptions rather than data.

As the proliferation of armed drones continues to expand to include nations and armed groups alike, beware the pundit or politician hyping a sensational threat. It might be another case of 2002 all over again.