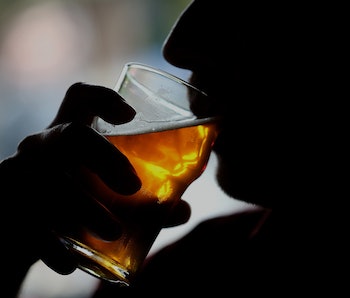 A lot of folks take January off from drinking. These people are probably wiser than me. The last time I took a January off from drinking I was 15. Which, I mean, come on: I didn’t even have a driver’s license then. Ultimate time to be partying. Anyhow, my almost 20 years of research — about half of it in the high altitudes of Colorado — has uniquely prepared me to offer some tips on how to prep your tummy for a night out. Short of Benjamin Button-ing yourself back to your college days of manageable hangovers, here’s my best advice.

This is the one that a lot of doctors, scientists, moms, and sign language-adept gorillas have already told you. Don’t be an idiot: Drink some water. Well, not just some. A ton of it. If it’s Friday morning and you plan on being out until 3 a.m., you need to start slamming H2O stat. I like those giant bottles of Smartwater — or its cheaper Trader Joe’s cousin — because their size presents something of a challenge for the consumer and “electrolytes” sound like they’re accomplishing something I will never fully understand. For the environmentally conscious, a Nalgene will do. Fill it up, then fill it up again. Repeat. Oh, and then keep drinking water all night while you’re drinking booze. It’s sort of a pain in the ass to order at the bar, but, hey, it’s just about the only free thing they’ve got back there.

Before it somehow made the basketball team of my alma mater, Boston College, even worse, Chipotle was my go-to restaurant before a night on the town. That burrito baby nestles itself into your stomach and fights against most other intruders. The result is twofold: It’s hard to drink too much — at least at first — when you feel fuller than the first dead guy in Se7en. Also, the burrito magically transforms into a guacamole-glopped sponge to soak up what little alcohol you can force down. And it’s those fabulous carbs doing the legwork. I’ve spent plenty of time in the lab trying out steak and salad or chicken and green beans before partying. It doesn’t cut it. If you don’t think the amount of vodka you’re about to consume will bazooka Chipotle’s E. coli, then go for pizza, pasta, or a big ol’ sandwich. If you can commit to two days of carb crushing — like you’re about to compete in that scene from Revenge of the Nerds where they’re riding the tricycles — then all the better.

I have a finicky stomach: always have, always definitely will. I’ve tried all manner of stomach aids and acid reducers, from Pepto to Prilosec. I find one of the oldest school approaches to work the best: Alka-Seltzer. Dust off a decidedly medicine-tasting glass of Extra Strength right before your Uber arrives. You see, drinking causes your stomach to produce more acid, so the antacid should do its part to numb your midsection from the pain you’re about to inflict upon it.

If you’re feeling sick at the bar, twist a childhood flu memory into delinquency by ordering a drink with carbonation. My mom used to give me ginger ale when I was uncontrollably barfing into a wastebasket while I watched a television miniseries, The Langoliers, (very specific memory coming to the surface here) based on Stephen King’s novella in Four Past Midnight. “A ginger ale, barkeep!,” I might say. “With a splash of Jack Daniel’s. And by ‘splash’ I mean I’ll have a double.” Beer, tonic, and club soda will — sometimes — do the trick, too.

Jim Koch, the founder of Samuel Adams, has become famous all over again for his secret to offsetting alcohol’s effects: consuming yeast before drinking. Now, this tip might not be directly related to your stomach, but here’s the deal: The less wasted you get, the happier your belly will be. Which, in the end, might be the tip that trumps ‘em all. Come to think of it, maybe I’ll take next January off.

More like this
Mind and Body
8.17.2022 6:05 PM
Does chewing gum burn calories? The answer may be hard to swallow
By Allison Parshall
Science
8.17.2022 10:00 AM
One surprising insect could help solve farming’s pest problem
By Tara Yarlagadda
Mind and Body
8.16.2022 1:30 PM
These 10 common foods have the smallest environmental impact: study
By Jennifer Walter
Related Tags
Share: