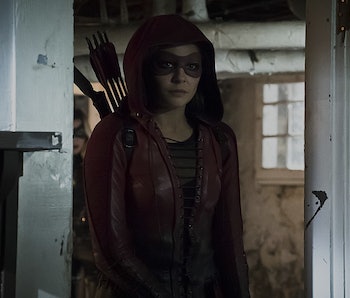 The CW’s public relations department can take a smoke break every so often because Arrow star Stephen Amell has such a huge audience that he can do their work for them. They’ve just given trailer duties to Amell, who has uploaded a two-minute trailer for the second half of Arrow Season 4. Within its first hour it got 500,000 views. But what’s got the comments section freaking out?

Somehow Thea Queen, a.k.a., Speedy, has also entered a critical state lending to theories that she’s the major death of the season and not Felicity. How? Why? Anyone’s guess is as solid as the next, but the one-off return of predominant love interest Roy is suddenly looking more ominous. It’s starting to look more like he’ll wrap up her character than he is completing any unfinished business.