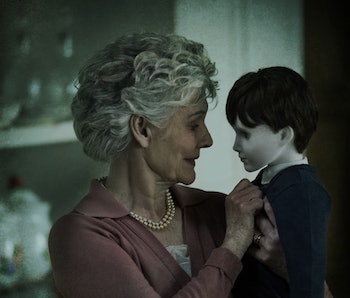 The trailer for The Boy teaches you a lot about a movie theater audience. Some people squirm, some laugh, some look like they’re being tickled with razor blades. Haunted dolls freak people out. This is presumably why people make movies about them.

Historically, audience have reacted to haunted dolls with a bemused, concerned “Oh God!” because the trope is both funny and disturbing. While the haunted dolls of horror cinema began as effective twists on childish images — in 1963, Talky Tina’s debut on The Twilight Zone stunned viewers — they now occupy a different space in the horror canon. What was once shocking is now laughably cliche, and making a haunted doll feel unique, not to mention scary, is a difficult feat.

In 1936, a film called The Devil-Doll, starring Lionel Barrymore, was released. The titular “dolls” weren’t exactly dolls, but were instead people shrunken down to toy sizes by a mad scientist. The demonic doll had been invented, but not refined.

One of the first instances of a talking, evil doll was, not surprisingly, a haunted ventriloquist dummy on The Twilight Zone. Willie, the ventriloquist dummy, delivers one of the final lines of the episode, asserting that he was the real one all along, and that his owner, Jerry Etherson, was the real puppet. This turn, which felt like a bit of a reach, contributed to that episode’s reputation as a totally mediocre thing that existed to sell commercial time.

The next year, Talky Tina appeared in a Twilight Zone episode, becoming a much more memorable version of this same trope. Pre-Talky-Tina,most haunted dolls had a voodoo backstory. The plot of the episode addressed a woman’s second marriage, and the feelings of animosity between her new husband and her daughter from a previous marriage. Talky Tina was modeled after the popular children’s toy Chatty Cathy and voiced by the woman who lent her voice to the actual Chatty Cathy dolls. Though she wasn’t explicitly controlled or possessed by a demon or spirit, the doll seemed to feed off her little girl owner’s discomfort, threatening the girl’s new father (Telly Savalas for some reason).

In 1964, yet another haunted ventriloquist dummy appeared in Devil Doll, which borrowed its title, but not its plot, from the 1936 film.

In 1978, a strange little film starring Anthony Hopkins premiered, twisting the concept of an evil ventriloquist dummy yet again. The film, called Magic, left the mechanism behind its dummy’s evil unclear, and viewers weren’t meant to know if Hopkins’ character was imagining his conversations with Fats. The film wasn’t fantastic, but its imagery was groundbreaking. Seeing Anthony Hopkins’ familiar, and naturally creepy, face melded with his dummy’s was quite a sight.

A 1987 film, Dolls attempted to return to the imagery of haunted porcelain dolls, but it was blown away at the box office by Child’s Play, which introduced perhaps the most famous evil doll of all time: Chucky.

Chucky went on to appear in several sequels, including Child’s Play II, Child’s Play 3, Bride of Chucky, Seed of Chucky, and Curse of Chucky. The films, in addition to solidifying the haunted doll trope as a popular part of contemporary horror, emphasized the uncanny disconnect between violence and children’s toys. Chucky wasn’t just angry, he was crude and sexist, spewing vitriol as he victimized the human characters in his stories. The Child’s Play movies benefitted from practical effects like animatronics and puppetry, portraying haunted dolls that moved on their own for the first time.

In 1982, Poltergeist featured a house full of inanimate objects possessed by the ghosts of Native Americans, including an infamous clown doll. While Chucky had appeared in his original state like an actual toy the average kid might own, the creepy clown from Poltergeist was laughably unrealistic.

In 1989, the same creator who had attempted success with Dolls released Puppet Master, a film about demonic puppets which earned its own cult status. Puppet Master became a long-running franchise that was markedly darker than Child’s Play, featuring suicides, Nazis and taxidermied pets brought painfully back to life.

In 2004, the haunted puppet trope was resurrected again in Saw. Though Billy the puppet, who served as the face of the Saw torturer, wasn’t ever confirmed as being possessed, he did exhibit abilities that a regular puppet wouldn’t have, like riding a tricycle down a dark hallway.

Billy the puppet, designed by James Wan, went on to appear in Saw sequels. 2007 yielded Dead Silence, yet another film about evil ventriloquist dummies.

In 2013, Annabelle, the haunted porcelain doll based on a real, also haunted Raggedy Ann doll, made her first appearance in The Conjuring. The doll enjoyed a spin-off film, Annabelle in 2014, and a sequel is coming this year.

The Boy is a twist on the traditional trope because the doll in question is treated like a real boy by his owners/parents. This further blurs the line between the animate and the animate in a strategically uncanny way. Even if the film isn’t fantastic, it’s a rare reinvention of the haunted doll trope, which will bring the decades-old trend back to theaters.