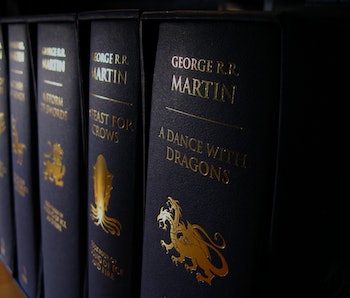 Sometimes, as much as you want to dive into a pile of pages and emerge with ink-stained fingertips, infused with that new-book smell, there just aren’t enough hours in the day. Reading is slow going. But don’t despair — there are plenty of ways to consume books without actually setting eyeballs to a page. We’re here to help.

1. Know the conversation around the author

If you want to read a book for the purpose of water-cooler party conversation and you haven’t gotten around to it, distract your audience by bringing up the author. For example, you might not have had time to read the thousand-plus pages of the Song of Ice and Fire series, but if you know the conversation around George R. R. Martin and his lack of getting his shit together, all you have to do is bring it up and the conversation will automatically turn to speculations on when Winds of Winter might finally come, what an artist owes his audience, and whether he needs a ghost writer.

Or just a ghost puppy.

Problem solved. Nobody has to know you haven’t read the actual books, and you still get to be part of the cultural conversation.

In most cases, the screen adaptation is inferior to the books: We only need to look to some of the Harry Potter movies to see why. However, in this day and age of ridiculously good TV, when many shows unfold like novels, the question is no longer a given. Case in point: Outlander and The Leftovers. Outlander is a Golden Globe nominated historical drama that’s pretty damn good, mostly because it cuts the parts that blather about plants for 30 pages and handles the weird rapey stuff much better than the book. The Leftovers is an all-around amazing drama that managed to be leaps and bounds better in its second season once it ditched the book entirely, because the book, while well-written, is completely aimless.

While generally the argument “The book is better!” is sound when it’s a movie adaptation, it’s not so certain in TV anymore. As blasphemous as it sounds, sometimes you really will get more out of the show.

Let’s say you want to know what Ayn Rand is all about but you don’t want to suffer through Atlas Shrugged or The Fountainhead. If you just research Rand and objectivism, you’re pretty much set. Granted, this doesn’t work for authors who don’t operate on big ideas, but you’d be surprised how many it can work for, including “children’s” books like the Narnia books and The Golden Compass. Know the ideas, know the book.

There’s all kinds of edible paper out there — maybe that’s the way to mainline the words to your brain. And if it isn’t, hey, you’ve gotten a good snack and you can’t say that time you ate a book won’t make for a weirder and more dynamic party conversation than just talking about the book.

This is better than Sparknotes because there will probably be snacks, and you’ll get to hear everyone else’s disparate takes, arguments, and simple explanations.

You’ll emerge from the experience with a more well-rounded understanding than you’d have from a single source if you tried to read about it. This method comes with the risk that you might never be invited back if they notice you haven’t contributed, but that’s when you offer to bring the snacks next time and say, “Hey, what’s up with George R.R. Martin? Think he’ll ever get his shit together?” and back away slowly.

More like this
Entertainment
12 hours ago
Knock at the Cabin trailer gets roasted online for one bizarre mistake
By Alex Welch
Culture
Sep. 12, 2022
Rings of Power pulls off a brilliant trick Peter Jackson never dreamed of
By Jake Kleinman
Entertainment
Sep. 21, 2022
Andor brings back a brilliant concept from 1970s Star Wars canon
By Ryan Britt
Share: