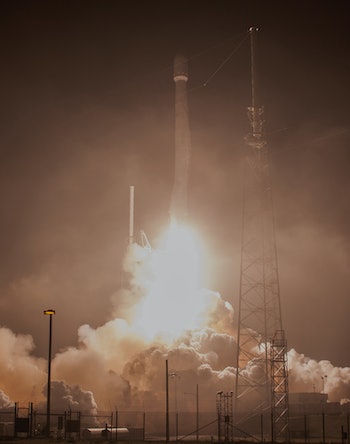 On Thursday, NASA finally announced which private spaceflight companies were going to be awarded billions worth of contracts to handle the agency’s resupply services for supporting the crew of the International Space Station: SpaceX, Orbital ATK, and Sierra Nevada.

It was unusual, though not a big surprise, to see that NASA gave contracts to the first two. SpaceX and Orbital ATK were already awarded the first round of the agency’s Commercial Resupply Services (CRS) contracts back in 2008. Those flights have been going on ever since 2012.

But it hasn’t always been pretty. Both companies have run into various kinds of problems — some even ending in explosive failure (literally). And those disasters have caused the ISS crew to be a little more wary of how its supplies are being used, as well as halting the progress of some scientific studies being conducted.

Apparently, NASA was deterred by those events to keep from re-upping its partnership with both companies. (It helped that the latest round of December launches went off without any hitches.)

But few people expected NASA to also bring in Sierra Nevada into the CRS fold. Don’t feel bad if you’ve never heard of the company — it doesn’t have any grand achievements to its name yet. Still, its work deserves recognition: Sierra Nevada has been working on an orbital spaceplane called Dream Chaser, to be launched on an Atlas V rocket and then land horizontally on a runway — just like the Space Shuttles did.

In fact, Dream Chaser basically looks like an updated version of the Space Shuttle, only smaller:

Dream Chaser is the only resupply spacecraft that’s reusable. SpaceX’s Dragon craft can jettison a reusable capsule to deliver items back to Earth, but the ship itself still burns up upon reentry into Earth’s atmosphere. And Orbital’s Cygnus ship is just a one-and-done affair, also destroying itself on its way back.

Why NASA Has Spread the Wealth:

So what’s going on here? Why has NASA decided to spread the wealth among three companies — two of which have experienced multiple disasters, and one of which has no prior experience in getting supplies to the ISS — instead of just dumping its needs onto the single most reliable company? With potentially $14 billion on the line, isn’t this a bit too risky?

The answer can be gleaned from the Aerospace Safety Advisory Panel’s (ASAP) 2015 report. Over 32 pages, ASAP provides a good assessment on many different parts of NASA’s activities, but with regard to work on the ISS, the report notes that, “recent cargo launch failures reinforce the fact that space fight is hazardous and has tangible inherent risks that must be taken seriously and planned for in a thorough manner if probability of mission success is to be maximized.”

Most importantly, though, the report states these failures “demonstrate the importance of having multiple launch methods for logistically supporting our crews on orbit.”

“The unprecedented loss of three different launch vehicle systems reinforces how difficult space fight is and underscores the importance of both having multiple launch systems from which to choose as well as the need to ensure that logistics planning is fault-tolerant.”

Two big takeaways on that particular quote. The first is that having multiple systems on hand gives NASA choices, and the ability to decide for itself which system can meet its needs for a particular mission.

The second is that plans need to provide a certain degree of fault-tolerance — it’s okay if something goes wrong! NASA needs to know that uncrewed missions might go badly, since these are private companies trying to do things no other entity has done before. They are developing new technologies and systems that haven’t been used before, and these contracts aren’t simply part of a business model — they’re a way to test those technologies. Multiple companies means if one company fails, another can take over.

In other words, NASA is looking to spread the risk of these CRS missions among contractors, so that a single disaster doesn’t throw a gnarly wrench into the whole process. If NASA was throwing all its commercial space eggs into a single company’s basket, an accident would be a big blow to the ISS’s ability to sustain itself and continue its work.

In addition, it would seem like NASA wants to encourage the growth of a wide array of technologies — not just prop one up kind of launch system or spacecraft. This is crucial for private spaceflight in the long run, since NASA will be able to partner with different companies that specialize in very distinct types of missions, crewed or uncrewed. That’s why, in the agency’s eyes, its worth giving a shot to a newcomer like Sierra Nevada.

The report also lauds Orbital ATK’s and SpaceX’s speedy, and thorough, and transparent investigations into their respective disasters, maintaining that this a good sign the companies are taking disasters like these seriously and working as carefully as possible to learn from mistakes. During both investigations, the company’s leaders were pretty forthright about their conclusions and eager to enlist the help and oversight of NASA and the Federal Aviation Administration.

Given what the safety report entails, it’s suddenly pretty obvious NASA was going to pick all three companies in the end. It’s the best outcome for both NASA and for the commercial spaceflight industry.