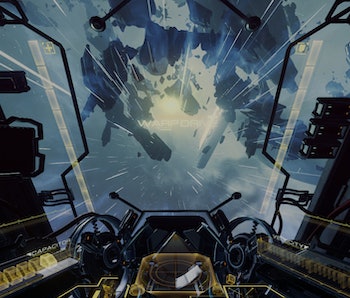 Putting players in other worlds, ones different from our own, is something many video games aim to do. They work to immerse players in universes that challenge our morality, engage our instincts, and encourage us to explore our imaginations. For years the gaming industry has been producing games with better graphics, more intelligent design, and deeply moving writing in order to achieve this type of immersion to a greater degree, but in 2016 with the release of virtual reality? Everyone is hoping to take it a step further.

Among these projects lies space simulation based titles such as Elite Dangerous, EVE Online, and Star Citizen; who aim to produce a truly immersive experience players won’t want to get up from. And while some have certainly accomplished their goal to a degree — virtual reality may be exactly what they need to take it the full mile.

See, there are multiple levels to immersion in video games, and each level affects individual players differently. Some might argue that music does it for them while some might argue that graphics do the same, it just depends on the type of experience one is looking for. As such, many space simulator projects have worked to incorporate every piece of the puzzle into their experience: sound design, graphical perfection, intelligence dialogue, realistic controls, and so on — the goal being to immerse every player regardless of their interests. Certainly, they’ve done a great job, but they’ve been missing a piece of the puzzle: virtual reality.

If you’ve ever played a space simulator, odds are you’ve worked to go the full mile by purchasing a nice set of headphones, a flight stick, and a throttle. Hell, you might even have a few pedals under your desk and a voice command system running through your PC — but what lies around you can’t fade away. You’re still at your desk sitting in front of a few monitors with the real world continuing on behind you.

But that’s where virtual reality comes into play, pulling you into the world and allowing you to step straight from your office or gaming room into the cockpit of your spaceship. You’re able to look around it, interact with the various menus inside, and even move your face closer to see clearer text on your hud. It’s the extra level of immersion players have been looking for, and the one that’s going to bring VR into the homes of many this year.

Developers have been working on this technology for awhile too, namely those behind the HTC Vive and the Oculus Rift; with the goal of making the experience as painless as possible. They’ve contentiously improved the visuals by fixing various graphical issues and made sure the response of their VR headsets is on-par with the experience a player would be having without it on. Sure, they’re a few simple things — but it’s one of the reasons space simulators like EVE Valkyrie and Elite Dangerous are going to be the pinnacle of virtual reality when it launches later this year.

That being said, it’s no secret that virtual reality is going to be an expensive addition to anyone’s gaming setup, especially considering the minimum system specifications required to run the headsets. But regardless of the price, if you’re a fan of space simulators or considering one in the future, VR might just be one of the most valuable pieces of technology at your disposal, especially if you’re looking for the complete immersive experience.

More like this
Gaming
9 hours ago
10 best spooky games on Xbox Game Pass to play this fall
By Robin Bea
Gaming
6 hours ago
'Deathloop' Yerhva answers: Every correct response to all 10 questions
By Just Lunning
Gaming
4 hours ago
How to unlock the wild Trombone Champ secret ending
By Joseph Yaden
Related Tags
Share: